What the Election Can Teach Us About Our Relationships 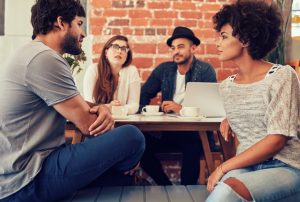 Although the presidential election may be over, the anxiety continues for many as they consider the future and scrutinize the events that led to present circumstances. These concerns are the themes of many conversations I am having with others, including friends, family, colleagues, and people in therapy. Thus, I decided to address this issue for others out there who might be grappling with similar thoughts.

No matter who you voted for—or even if you did not vote at all—there is much to be learned. Here are my top three lessons to come out of one of the most emotionally charged elections in anyone’s memory:

1. If you are shouting, you cannot listen.

Communication, or severe lack thereof, fueled a deep absence of understanding and empathy. Depending on what resonated with you, some candidates tapped into citizens’ deep fears and concerns, while others missed the mark. This led to many Americans feeling left out and unheard—at least until they voted. I think those who felt sidelined now have everyone’s attention.

The key takeaway for me is that there is no substitute for honest, clear, open communication, which involves active listening. For the next week, I encourage you to notice how often you are thinking of what you want to say next in a conversation rather than truly listening to what the other person is saying. Do you take a moment to digest what the other person is saying and consider their thoughts and feelings? Or do you react quickly, saying something defensive or inconsiderate of what was shared? Practice pausing, perhaps by taking a slow, deep breath after the other person is finished speaking to give yourself time to consider what was expressed.

2. Take a moment to consider how you speak about other people.

Hint: If you use the word “the” before any group of people, you are essentially objectifying them in some way and making any differences between you more pronounced.

From my work as a psychologist, working with people from a great variety of backgrounds in terms of race, ethnicity, religion, education, and sexual orientation, I can assure you that you have more in common with that “other” person than you might imagine. I encourage you to stop and consider your biases.

Additionally, people do not need a college degree to understand when they are being called stupid. Some of the most intelligent people I know did not go to college; various reasons exist for not attending college, from an inability to afford it to not needing the degree for a chosen profession. I wonder how people might have reacted if the media had used a more objective and less judgmental way to refer to those without a college degree instead of calling people “uneducated,” which connotes “stupid.”

From my work as a psychologist, working with people from a great variety of backgrounds in terms of race, ethnicity, religion, education, and sexual orientation, I can assure you that you have more in common with that “other” person than you might imagine. I encourage you to stop and consider your biases. If you are biased against a religious group, for example, see if you might be able to purposefully try to meet or get to know someone from that group to better understand their experiences and opinions.

3. If there is a cause that is near and dear to your heart, get involved in supporting it.

As people process the election results, many are reflecting on their purpose in life. People learned that simply observing others’ behavior or actions does not necessarily lead to desired outcomes. At this juncture, people can either take action or watch what happens next.

If you are not satisfied with the status quo, it might be time to find ways to engage in your community that support your values and beliefs. You may even improve your relationship with yourself when you do, as your actions and values may become more aligned. You might also deepen your relationships with others who share your perspectives and concerns.

Wherever you stand on the election and the candidates, I hope you will take time to consider the points I raised to improve your relationship with yourself and your relationships with others. If you stay in the present moment, rather than dwell in the past or fear for the future, you have the power to effect positive change regardless of your political views.