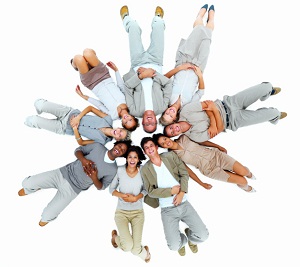 Several years ago, sex advice columnist Dan Savage coined the term “monogamish” to refer to long-term committed relationships that bend the rules of monogamy with the consent of both parties. Since that time, he has published thousands of letters from people in monogamish relationships, thanking him for giving them permission to try an arrangement that works better for them.

Last year, Showtime began airing a reality show called Polyamory: Married and Dating, which takes a close look at the lives of polyamorous people. Polyamory is the practice of loving more than one person at a time. The show stars a polyamorous triad—three people in a committed, long-term relationship—and a polyamorous married couple who have serious committed relationships with people outside of their marriage.

Myth 1: Nonmonogamous relationships are a free-for-all.

People who cheat on their spouse are, technically speaking, not in a monogamous relationship. But when nonmonogamy is entered into openly and on a long-term basis, all partners typically obey a variety of rules. In Showtime’s show, the polyamorous triad navigates the consequences of one member breaking the rules, and the result is increased communication. Nonmonogamous relationships don’t work without rules, and often the discussion and renegotiation of these rules can contribute to deeper intimacy.

Myth 2: Nonmonogamy is an excuse to cheat.

By definition, nonmonogamy means that people don’t have sex with only one other partner. But this does not necessarily mean they can have sex with anyone. Successful nonmonogamous couples establish strong rules about what is and is not cheating, and frequently have veto power over who their partners sleep with. While it’s certainly possible for one partner to be pressured into nonmonogamy, these relationships generally don’t work unless both partners enter into the relationship willingly and lovingly.

Myth 3: Nonmonogamy is bad for children.

With the divorce rate in the United States hovering around 50% and the number of single parents rapidly increasing, most children see their parents involved in multiple romantic relationships over a lifetime. So long as children have consistency in their caregivers and are not subjected to an endless parade of people to whom they become attached and who then leave, nonmonogamy is not harmful. Nonmonogamy, after all, does not mean an abandonment of all social mores and norms, and nonmonogamous parents are just as capable of keeping their sex lives private as monogamous parents.

Well-publicized cases of polygamy abuse are often the first things people think of when they consider nonmonogamous relationships. But modern nonmonogamous relationships are consensual for all parties. In these arrangements, it’s not just men who get to sleep with other people. Given that more women than men report being bisexual, nonmonogamy can provide a healthy sexual outlet for bisexual women who might not otherwise have such an outlet.

Many people involved in monogamish relationships have been married for decades. When one partner’s desire wanes, nonmonogamy can provide a sexual outlet that sustains the marriage. Because nonmonogamy must be carefully negotiated and constantly reevaluated, these arrangements can bring married couples closer together and encourage open, honest dialogue. Sleeping with other people also does not have to compromise the marital bond. Married couples sometimes have sex with friends periodically while still sustaining their primary commitment to their spouses.