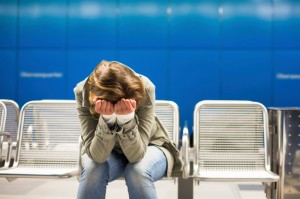 Six million Americans—almost 3% of the population—have panic disorder, a condition that causes sudden, overwhelming sensations of fear called panic attacks. Studies on twins suggest panic disorder may be partially genetic, and there’s good evidence that panic runs in families. Researchers know little about which, if any, specific genes cause the condition.

New research into a so-called “suffocation alarm,” though, may shed light on panic’s genetic underpinnings. The study, published in Biological Psychiatry, suggests that the shortness of breath so common to panic attacks might be linked to the body’s suffocation prevention mechanism.

Could a Suffocation Alarm Cause Panic Disorder?

Based on that research, this study’s authors theorized that panic attacks might be linked to an excessively sensitive “suffocation alarm” in the brain. Previous research on mice showed that a protein called ASIC1a helps detect carbon dioxide in the brain’s amygdala, an area that’s also linked to feelings of fear. To study the role this protein might play in humans, researchers genotyped variants of the gene in 414 people with panic disorder, then compared them to 846 controls without the disorder. They also used brain imaging and genotyping to evaluate amygdala volume in a second group of 1,048 participants, as well as amygdala function in 100 people.

They found that people with variants of the ASIC1a gene were more likely to have panic disorder. Moreover, people whose panic attacks caused respiratory symptoms such as shortness of breath were much more likely to have the gene. The researchers also found that the ASIC1a gene can affect the size of the amygdala, as well as people’s emotional responses to threats. The effect held even among people who had the gene but who did not have panic disorder.

Avoiding suffocation is one of the many tasks associated with survival. It’s possible, the study’s authors speculate, that fundamental survival mechanisms cause panic attacks. The ASIC1a gene could be a helpful mutation in environments that pose a high risk of suffocation, but a source of panic and distress in people who have the gene and who do not regularly face suffocation dangers.