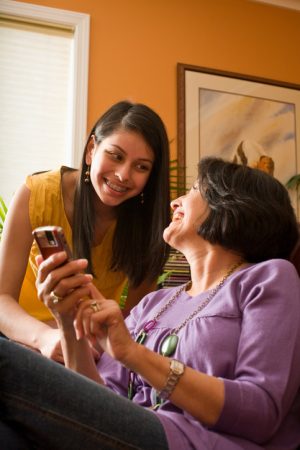 Within the past several decades, a shift has been observed in the relationship patterns of many mothers and daughters. Many seem to have abandoned the traditional hierarchy of parent and child for a relationship of equals, identifying with each other more as “best friends.” BFF (“best friends forever”) mothers embrace their daughters’ lives, sharing them and, at times, walking in their footsteps.

A close, friendly mother-daughter relationship is not in itself a cause for concern. But when the boundaries of the relationship become blurred, this can lead to confusion regarding the distinct responsibilities and obligations, of both parent and child, over what behaviors are acceptable within the context of the relationship. This confusion may, in turn, may lead to behavior unrestricted by limits, on the part of either mother or daughter.

Research has attempted to explain and explore the variables contributing to these mother-daughter best friend relationships. Authors Linda Perlman Gordon and Susan Morris Shaffer describe in their book, Too Close for Comfort: Questioning the Intimacy of Today’s New Mother-Daughter Relationship, what is referred to as a generation overlap, an intersection of lives that differs from anything seen in previous generations. Mothers and daughters today may shop at the same stores, utilize the same new technology, participate in the same social media apps (and possibly have some of the same friends or followers), and listen to the same music.

Some believe this generation overlap, and mother-daughter relationships in general, are made easier by a youth-fixated culture. In the article “My Mom Is My BFF,” Paige Williams writes of a stay-young revolution, where women are enticed and encouraged—some might say pressured—to think, act, and look young.  With the widespread availability and broad variety of technology and resources that promise to preserve youth, many mothers may find it fairly simple to recapture their years of young adulthood. And who better to morph with than a daughter, the one who likely most closely resembles their teenage selves?

Having their worlds so closely intertwined has made friendships between mothers and daughters more common than in generations past, something that is not necessarily harmful. After all, who doesn’t want a loving and caring relationship with their mother?

But these friendships may blur the distinctions between parent and child. If mother and daughter are best friends, what happens when the mother tries to parent, to speak out as a mother rather than a friend? Where do the lines get drawn? The danger of opting for the BFF route appears to lie in its potential to minimize, as well as distort, the parent-child relationship. When mothers and daughters are “besties” first and parent and child second, the maternal role—providing direction, support, and the tools needed to become a confident, self-sufficient adult—may be in jeopardy.

Mothers and daughters who enjoy a close bond may share many details about their personal lives, dating details among them.

The dating world has always offered any number of challenges, among them the various rules, cultural norms, and aspects of etiquette often applied to dating individuals, particularly women. Some of these customs differ little from those of generations past, while others may be vastly different or newly established. In many cases, mothers may guide their daughters, using experience to navigate new challenges, as they also struggle with the unspoken rules of dating in a society that may encourage and expect them to balance a semblance of youth with the maternal role.

The current age of reality TV, smartphones, and social media give the term “being connected” a deeper level of meaning, in terms of dating. These technological advances have been shown to impact the development and progression of romantic relationships, but can they also contribute to the development of mother-daughter enmeshment?

Communication patterns between dating young adults today may in some cases differ significantly from those of the previous few decades, and parental involvement in teen and young adult relationships may be both more limited and more casual. Mothers who are friends with their daughters, or who want to be, may try to avoid setting strict rules, whether out of simple trust and support or in order to maintain their daughters’ good favor.

This may lead some mothers to work to become friends with their daughters’ dating partners. Some mothers may even come to act as “surrogate girlfriends,” displaying behavior that is friendly and supportive but may eventually cross the line into impropriety, even as it undermines the significance of their duties as a parent.

Mothers who assume a ‘surrogate girlfriend’ role may:

The Effects of an Enmeshed Relationship

Susan Forward and Donna Frazier Glynn, authors of Mothers who Can’t Love: A Healing Guide for Daughters, explained this relationship as one where mothers depend on their daughters to fulfill all their needs for companionship, entertainment and a meaningful sense of identity. They call these mothers “mothers without borders,” as they tend to lack the ability to establish healthy boundaries.

Enmeshed relationships can have profound effects on daughters as they journey into adulthood. As Forward and Glynn explain, a daughter may not know “where she stops and her mom begins.” This may lead to developmental setbacks in the attempts of daughters to become independent, develop a sense of identity, and express themselves individually.

Enmeshed relationships can have profound effects on daughters as they journey into adulthood. As Forward and Glynn explain, a daughter may not know “where she stops and her mom begins.” This may lead to developmental setbacks in the attempts of daughters to become independent, develop a sense of identity, and express themselves individually. A daughter may also feel uncomfortable and sometimes resentful of her mother’s over-involvement in her dating life, but because the intrusion is often packaged as motherly love, they may give in to the familiar pattern of behavior.

Mothers who have unfulfilled needs, lack a romantic partner, and/or are affected be low self-esteem may look outside themselves to fill what feels empty inside. They may, thus, be more susceptible to the creation of these entangled relationships, especially with regard to the development of a “surrogate girlfriend” role, as connecting with a daughter’s partner may serve as somewhat of a replacement for what they feel is missing or lost.

I encourage daughters and mothers to consider the following:

Daughters, you may form hundreds of friendships and share your stories and life events with countless people. However, you will only have one mother. Enjoy the closeness that comes with this bond and the many ways you can be a part of each other’s worlds. Recognize that a large step for your growth into adulthood is developing the ability to think and respond as an individual. Part of this is having experiences of your own, separate from your mother. You will know your mother-daughter relationship is healthy when you feel safe venturing away from the nest.

Mothers, when you honor and value your role as a mother and demonstrate responsibility, respect, and healthy boundaries, you send the message to your daughter that you are willing to do this tough job because she is worth it. As you model for her not only the role of a mother, but that of a responsible adult, you are at the same time fortifying her self-esteem—and your own.

Gordon and Shaffer interviewed a mother who described it best: “We share best-friend moments, but she is not my best friend, that would rob her of what we really cherish – which is that I am and remain her mother.”