HELP! Our Family is Addicted to Yelling 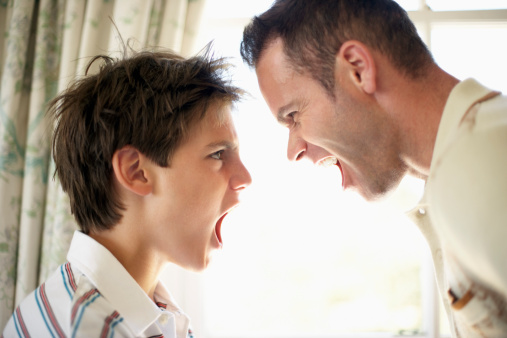 Shouting, yelling, screaming. Nearly all parents have done it; nearly all children age 10 and under have heard it. In small doses, such as in emergencies, yelling is not believed to be harmful. Yet, as common as this interaction is within families, if it happens too often it can break down positive conflict-management skills and flood a family’s emotional field with negative affect.

Why Do We Yell?

The most basic reason we yell in any situation is because, on some level, we feel we are not being heard. Whether literally—the person is in another room, for example—or figuratively, not feeling heard is an incredibly frustrating experience. When we believe we have a valid point and are being intentionally ignored, misheard, or invalidated, inside our brains we are thinking, “They must not really be hearing me. I will speak louder. That should do the trick!”

Yelling also stems from a need for control. Yelling is a form of verbal aggression; it carries the message that the yeller desires to be the loudest and most dominant person in the room. If someone is yelling, it is a good bet that the yeller is feeling out of control and is feeling the need to dominate the interaction.

Parents often experience frustrating and even oppositional behaviors from young children. Depending on your child’s age, he or she may be focusing on developmental tasks ranging from establishing a sense of independence to experimenting with rebellion. The act of not listening to you can actually be part of your child’s necessary development.

At various times of the day or week, parents’ reserves of patience and energy can already be low. For example, a full-time parent may feel that he or she can barely make it to nap time with sanity intact. A pre-nap meltdown from their toddler hits them at their absolute lowest point of the day. A working parent’s morning can be so tightly orchestrated that just the slightest alteration in routine can cause a cascade of setbacks and tardiness. Throw in an early meeting and some traffic, and there is a perfect storm of frustration which can come lashing out toward a child. Parents can reach a saturation point at which their own coping skills are no longer carrying them through a particular interaction. At these points, parents often resort to yelling in an attempt to regain a sense of validation or control.

What’s the Case against Yelling in Families?

Yelling raises blood pressure, heart rates, and adrenaline levels. Those who yell exhibit higher levels of the stress hormone cortisol in their bloodstreams over time. These physical consequences are also seen in those who are yelled at. Like second-hand smoke, second-hand anger can take a big toll on health.

That’s a case against yelling in general, but in families with children age 10 and under, there are several other reasons that yelling isn’t healthy.

Children look to their parents to maintain the safety—physical and emotional—of the family. Babies and very young children do not yet have the ability to determine the difference between a real threat to their safety and an upsetting or frustrating circumstance. Many parents can attest to this, hurrying to the scene after having heard their toddler scream as if hurt, only to discover the source of the scream was a minor frustration such as not being able to reach a toy. The child’s cognitions in this stage are quite concrete; circumstances are either “all good” or “all bad” and there is little room for ambiguity. Children under age 5 can therefore mistake a parent’s loud tone with an alert to a true threat. This can be terrifying for a child in this developmental stage.

Fear is one of the most basic and universal emotions—every animal experiences it. Fear is centered on a primitive part of our brain called the amygdala. When fear permeates a young child’s emotional experience, such as in a household with daily episodes of yelling, the amygdala will become overly active and this will inhibit the child’s brain from working on higher-level functions such as concentration, reflection, learning, decision making, and behavior planning.

With older children who are more verbal, the words that are shouted can be even more harmful than the tone itself. Even though yelling is an attempt to gain control through aggression, the irony is that in doing so, we actually lose control of our behavior and our ability to filter and manage what we are expressing. Negative labeling, blaming, and other harsh words are especially harmful to children because children accept unconditionally that what their parents say is true. Children between approximately ages 5 and 10 have the cognitive ability to understand the words themselves, but not the adult’s emotional context. They will internalize the messages from the parent without questioning if they are accurate, and will add those messages to their budding self-concept.

Finally, many parents who yell can relate to this scenario: “When I don’t yell, my child doesn’t listen to me. He or she only seems to respond (do what I want) when I yell.” The escalation involved in yelling can become a self-reinforcing feedback loop. Children can become desensitized over time to their parent’s escalation pattern. The child, who is interested mainly in persisting in play or attending to his or her own agenda, will naturally search for ways out of responding to a parent’s demands. We cannot fault the child for this; it is simply a piece of his or her development. The more parent-free space and time a growing child can carve out, the more he or she can explore the world around him/her and his/her own inner experience. The child learns that the parent will eventually escalate to yelling each time, and so the child learns that he or she does not need to respond until and unless yelling is used. The “pre-yelling” time becomes seen by the child as “don’t have to listen yet” time. And the parent, on the other side of this interaction, keeps needing to up the ante over time to get the same response.

How Do We Break the Yelling ‘Addiction’?

1. Set a SMART goal around yelling: a Specific, Measurable, Attainable, Relevant, and Time-bound goal that solidifies your commitment to changing this behavior. Such a goal may sound like this: “Within the next month, I will decrease my instances of yelling on weekday mornings until I’m yelling once per week or less during that time period.” Write down your goal and put it in a place you will see it every day.

2. Find ways to increase true power, so that false control is less tempting. Yelling is false control. It feels powerful in the moment, but it undermines our internal self-control and the quality of our relationships over time. Ways to gain true power include:

4. Speaking of choices, realize that yelling is only one of hundreds of things you can choose to do in a frustrating moment. Instead of yelling, you could:

Some parents choose a grounding object, color, or mantra which they use to bring their attention away from their momentary anger and refocus it on their goal.

5. Return often to a developmental lens through which to view your children. At all times, children must be expected to behave as children. They cannot and do not think, process, or behave as you do. It is entirely predictable that children will lose things, drag their feet, misunderstand you, ignore you, and throw tantrums at inopportune times. The more you can remind yourself that this is developmentally normal, the less you will feel personally offended or annoyed by childish behavior.

6. When—not if—you do yell, be prepared to acknowledge and apologize for this to your children. Parents must be willing to role-model to children the process of owning up to poor choices and the effects they can have on others. If as parents we are not willing to do so, how can we expect the same from our children?

Breaking ingrained patterns of interaction like yelling is not an easy thing to do. Parents must take full responsibility for “being the change they want to see” in their families. Parents must make their tendencies and triggers conscious, face them honestly, and focus their attention on them if they wish to change. Keeping a written goal, a list of alternatives, and a developmental perspective will be of great help to the parent who wishes to reduce yelling. Over time, parents who make these efforts will be able to enjoy a great deal more peace in their family, a reduction in stressful feelings, and an increase in the amount of true power they are able to exert over their lives and actions.