Fidget Spinners for Mental Health Issues, and Other News 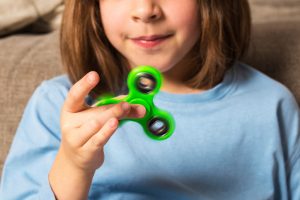 Fidget spinners, toys that allow people to quietly fidget by spinning a device, are surging in popularity. Many companies market these toys as relievers for stress and anxiety. They hold the 16 top spots in Amazon’s toy rankings. Together with fidget cubes, the toys occupy more than 40 of the top 50 spots.

As with many toy trends, some adults have responded with frustration, derision, and even paranoia. A false story recently circulating on Facebook claimed fidget spinners could disrupt Earth’s center of gravity.

Proponents of the toy say it could help people with attention deficit hyperactivity (ADHD), autism, or anxiety by offering a focused outlet for their energy. Some schools even allow students to use fidget spinners to help them concentrate. Experts, however, note a lack of research on any link between fidget spinners and ADHD symptoms. Rather than assuming the toys will work for alleviating symptoms of ADHD, experts recommend that parents seek research-backed treatment options.

Experts also say there is no reason to worry that fidget spinners are harmful. There’s little evidence that any single toy changes behavior or cultural beliefs.

Observing a person’s gait while they perform a cognitively taxing task can provide early evidence of dementia. The process, known as dual gait testing, may predict dementia in people with memory issues. According to the study, people with mild cognitive impairment whose motion slows down by about 20% while performing the cognitive task may be at an increased risk of developing dementia.

Why You Should Quit Chasing Happiness and Pursue Meaning Instead

According to a new book, The Power of Meaning: Crafting a Life That Matters, the pursuit of happiness might undermine its achievement. Meaning is what makes life worth living, the book’s author argues. Pursuing happiness as its own goal may be a distraction from the sense of purpose that is more likely to help people feel happier.

Bouldering Envisioned as a New Treatment for Depression

Bouldering, a popular form of rock climbing, may ease symptoms of depression. The authors of a new study say people who began bouldering three hours a week for eight weeks saw reductions in depression. They suggest the physical, cognitive, and social components of the sport may help. People may boulder with friends, and bouldering poses both physical and intellectual challenges.

Can Parents’ Tech Obsessions Contribute to a Child’s Bad Behavior?

Increased reliance on technology may undermine parents’ relationships with their children. According to a study that looked at surveys completed by mothers and fathers in 170 households, half of parents said technology disrupts time with their children. On average, technology interrupts parent-child interactions two to three times per day. The study suggests these interruptions may be associated with increased behavior problems from children.

Meditation May Cause Negative Feelings for Some, Study Finds

Research links meditation to numerous benefits, including improvements in mental health. However, research that includes interviews with nearly 100 meditation teachers and meditators suggests it may not be positive for everyone. Some people who meditated reported side effects such as insomnia, sensitivity to light or sound, anxiety, or panic.