A Fearful State of Mind: Moving from Peril Toward Opportunity 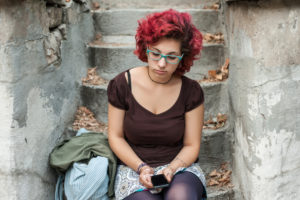 I spent a lot of my early career writing and leading a workshop on the topic of fear. When I asked myself, early on, “What is my biggest obstacle to overcome in terms of speaking publicly to build my practice?” I noticed that fear would appear, out from the shadows. I discovered I was living in a fearful state of mind and that I was particularly afraid that I would be exposed as “not knowing.” A fraud.

In light of the fear and related emotions many are feeling right now with regard to the 2016 presidential election, recent acts of terrorism, increased hate crimes, and police violence, to name just a few concerns, I wanted to revisit that topic of fear.

I want to talk about how and why a fearful state of mind can leave people susceptible to those who fan the flames of fear to get money, their vote, and so on, and how individuals can reduce the fear they experience in order to reduce stress and protect themselves from manipulation.

The fear I address here is not the type experienced in response to an immediate and present threat. Rather, I address a persistent fearful state of mind that can leave us vulnerable to harmful influence and stress, a state of mind where fear exists constantly, unconsciously, as we scour the news vigilantly for threats and in all aspects of daily life.

The Purpose and Misuse of Fear

All humans live with some form of fear. It is key to survival. Our brains are hardwired to react physiologically to danger, a remnant from days when humans were often face-to-face with large, furry predators wanting to eat them.

When we feel afraid, a part of our brain flips a switch and goes into fight, flight, or freeze mode. We either fight, freeze, or flee physically and/or emotionally from what we perceive is threatening us. During this process, our cognitive capacities—our ability to think rationally and analyze situations—becomes compromised and can even shut off completely.

When we live with a fearful state of mind, this fight, flight, or freeze mode runs like background music—on low, all the time. When this is the case, our minds may incorrectly perceive the extent of any particular threat, leaving us vulnerable to manipulation, such as false promises of reassurance or solutions.

Because fear leaves the mind vulnerable, it can be—and often is—used as a tool for manipulation and profit. A fearful brain may be more likely to exaggerate a potential threat and cause us to lose our ability to think constructively or take appropriate action.

Here are a few extreme examples of how fear might be profited from:

Engaging with Your Fear

A fearful state of mind creates and feeds off extreme responses (inaction and overreaction), which are byproducts of what happens in the brain during a fight, flight, or freeze response.

Because fear leaves the mind vulnerable, it can be—and often is—used as a tool for manipulation and profit. A fearful brain may be more likely to exaggerate a potential threat and cause us to lose our ability to think constructively or take appropriate action. Working with a fearful state of mind, then, requires an ongoing, active, reality-based engagement with these thoughts and feelings.

Let’s return to the fearful state of mind I mentioned earlier. To resolve this, I figured, I would first need to get to know my fear so that it would go away. Not so easy! Fear is slippery. Fear is also a good teacher: fear taught me “knowing” it would not make it go away. I needed, instead, to learn to work with my fear, to maintain an ongoing relationship with it.

I want to empower you to learn to engage and work with your fear as I have learned to do with mine.

The following series of steps can help you shift from a fearful state of mind one more grounded in reality:

These suggestions can have a significant positive impact, but they do take practice. A well-entrenched fearful state of mind may require the help of a therapist. Therapy can offer a space to safely explore the root of the fears and provide a steady space to practice, over and over, shifting the mind from a fearful state to a more open state.

If you can learn to shift your state of mind, you may be more likely to find greater peace and calm within yourself, and you are also likely to develop renewed energy for more creative, pleasurable, and productive pursuits.

Wallace-Wells, B. (2016, July 12). Police shootings, race, and the fear defense. The New Yorker. Retrieved from http://www.newyorker.com/news/benjamin-wallace-wells/police-shootings-race-and-the-fear-defense