Excessive Impression Management and Its Interference with Identity 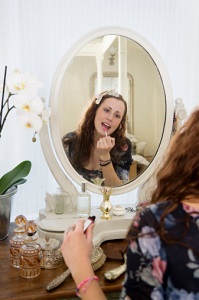 We all manage the impressions other people have of us. We think about what we might wear to an event or a job interview, we consider how free we can be with “expletive deleted” words in a given social situation, we may carefully choose what information we reveal about where or if we went to college or what kind of work we do. When it is appropriate, impression management helps us get what we want. However, when we manage other peoples’ impressions of us in most of our interactions, we run the risk of interfering with our identity by impeding the development of our sense of self.

Excessive impression management involves overly focusing on creating a particular view of who we are and controlling how people think and feel about us. When so much of our attention and energy is placed on controlling how we are perceived, there is little room for us to think about, be interested in, or develop our real selves. Typically, when we are overly invested in impression management, our sense of self has little substance. In trying to become the person we believe people want us to be, we become chameleons, changing our shape and form, altering our ideas. Sometimes, we may not even notice our own ideas (or be interested in developing them), because we are so intent on being seen as the impressive person we have assessed this particular situation requires.

Why would it be a problem if we are successful in creating the impressions we desire? Why does it matter if today we determine that it would be good to be viewed as creative and funky, and tomorrow we know we have to come across as smart and conservative?

My experience as a therapist has allowed me to witness the damage that can result from constant attention to impression management. People who have practiced impression management excessively for years (some quite successfully) often find that they begin to experience a vague sense of something being wrong with their lives. Many have had difficulties in relationships or in forming lasting relationships. When they come to therapy, they have difficulty finding words to explain an emptiness or tired dissatisfaction with life. It’s as if a false structure of self collapses and leaves little underneath to hold the person upright. What becomes apparent by talking in therapy are the underlying feelings that have been pushed aside in the process of creating false impressions. As these clients talk in therapy, they begin to uncover shame, a lack of self-confidence, anxiety about failure, self-hate, and many other feelings they’d defended against.

Lily, a 31 year-old client, is a successful executive in a publishing firm. She makes an excellent salary and has steadily risen in her profession. She is  active socially and is often the life of the party at the many events to which she is invited. When she came for her first appointment, directly from work, Lily was conservatively dressed in an expensive suit and carried a designer handbag. In our first session, she reported feeling depressed and had a difficult time trying to explain a feeling of unease about herself and her life. She told me “I don’t know exactly what I am feeling or what the problem is. I should be happy. I have a great job. I am always going out and having fun. But I guess I’m not really having fun. I don’t know. Maybe I’m beginning to feel I should be thinking about some kind of relationship. I go out on a lot of dates, but I haven’t wanted to be in a relationship. I just don’t know what the problem is. I shouldn’t be feeling this way, even though I guess I really am not sure what I am feeling.”

Lily and I began to work together, and in the fourth month of our work, she came to her appointment on a day that she didn’t go into her office. She wore torn jeans, a short cropped top and had a pink streak in her hair that hung loose instead of her usual bun. She also had a small ring in her nose. It took a moment for me to realize who she was! It wasn’t just her change of wardrobe that I was responding to. Somehow it felt as if I were in the presence of a totally different person than the one I was beginning to know. As she sat down, I said, “Wow, you look really different today.” Then I asked  if she could talk about her two very different looks. What Lily described to me illustrated excessive impression management.

Lily said she was going to meet some old friends she knew from college. She hadn’t seen them for five years, although she stayed in contact, mostly by email several times a year. She had already told me that she had been popular in college but hadn’t mentioned that she was a drama major and hung out with a group who were generally outsiders on the campus. She also hadn’t made it clear that while she was popular within her group, that wasn’t the case in general. She said, “I might not have been popular with everyone, but I did keep them intrigued by how I looked and by my in-your-face style. I had dyed pink, green, or striped hair; I smoked a lot of weed and was usually the one to buy for the rest. We were a very tight bunch. We kinda slept around inside the group. It was a great time in my life.”

I asked Lily whether her choice of dress was related to this meeting with her old friends or whether she usually dressed this way with friends when she wasn’t at work. “Oh no,” Lily said, “I would never dress this way with my friends today. I guess I have a whole variety of clothes that I wear, depending on who I’m with. For instance, I would never wear my designer stuff with the girls I go out for drinks with on most Wednesday nights. They don’t know I make so much money, and I would feel funny around them. I also have other clothes I wear with family. I can’t be too funky or too fancy with them. They would be really critical if I looked like that. They don’t really get what I do now, the same as they never knew much about me in college. I’m really selective with what kind of information I reveal to people. I’m really worried about how to dress today because I’m not sure where everyone is at. I didn’t think the corporate look or the way I dress with my Wednesday group would make the right impression, so I thought this would be a good compromise.” With what sounded like great pride, Lily continued, “I suppose I am a woman for all seasons. I can be whatever I think people want me to be.”

As Lily and I continued to work in therapy, she began to recognize that as a “woman for all seasons” she didn’t have a sense of what kind of a woman she really was. While we all have many different parts of ourselves, and it’s not so unusual to be different with different people, Lily had no sense of a core self. She began to understand that her unease and empty feelings were related to the absence of knowing who she was and what she wanted. This awareness motivated her to commit to work in therapy. Over time, she discovered how she got to be without a strong self, what parts of herself were there but not attended to, and what feelings she had trouble tolerating. Most of all, Lily developed an identity. She became aware of her own desires, feelings, and dreams.