Discernment Counseling for Couples on the Brink of Divorce 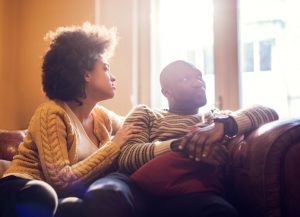 Steve and Rebecca have been together for seven years, married for four, and have one toddler. Since the birth of their child, arguments between Steve and Rebecca have escalated to the point Rebecca’s threats of “I can’t do this anymore!” are met with shrugs. But after their last fight, she left to stay at her parents’ house for the weekend. It was a wake-up call for Steve, who wants to try couples therapy to improve communication and repair their partnership. Rebecca is tired of arguing and is still seriously considering a long-term separation.

Does this fictitious (yet all too real) couple sound like you and your partner? Is one of you leaning out of the relationship, unsure whether it is healthy to stay, while the other is leaning into the relationship and ready to make healthy changes? If so, you’re not alone. It’s not uncommon for couples experiencing the intense flames of conflict or the slow smolder of disconnection to view the future from different angles.

In times of relationship distress, counseling can be a valuable resource. The question is, what kind? In individual therapy, only one side of the story might be heard, making it difficult to identify a way forward that serves not just one partner but the relationship. Yet this situation also can present a real challenge to even the most experienced couples therapist, particularly in cases where one partner isn’t totally on board with the therapy process. Three popular and well-researched couples therapy models—emotion-focused therapy, imago therapy, and the Gottman Method—are each effective primarily with couples who want to actively work on their relationship and are wholly committed to each other.

Discernment counseling is a chance to slow the decline into disconnection and take a deep look at your options for your relationship.

To help address this complex situation facing couples whom he describes as “mixed-agenda,” Dr. William Doherty envisioned a new type of therapy for couples on the brink of divorce: discernment counseling. Discernment counseling is a chance to slow the decline into disconnection and take a deep look at your options for your relationship. A trained discernment counselor holds hope for both partners—no matter their positions—while a decision about the future of the relationship is reached, whether that decision is to divorce/break up or make one last effort at repair.

Discernment counseling is designed as a short-term counseling process that is focused on making a mutual decision on one of three paths forward. In other words, each of the paths represents a different form of “treatment,” and the discernment counseling sessions represent the conversations to decide which treatment is best for both partners. Here’s a closer look:

Path One: The Status Quo

Path one is to maintain the relationship as it has been. Many couples who enter discernment counseling rule out path one quickly—the status quo has become unsustainable, thus they are seeking help to make a decision that brings change. Sometimes, however, at the end of discernment counseling no clear commitment to leaving or staying has been reached. In these situations, couples can simply default to taking a break from the process and trying again for a decision at some point in the future.

Path two is to move toward ending the relationship. Although some path two decisions are not mutual, in that one partner chooses separation or divorce against the wishes of their partner, the goal of a path two decision would be for both partners to feel clear and confident about a decision to part ways. When couples choose separation or divorce, the discernment counselor makes them aware of additional resources, including individual therapists and divorce professionals who can facilitate a healing and fair separation process.

Path three is to make a six-month commitment to couples therapy in an all-out effort to restore the relationship to health. Separation or divorce are taken off the table during the couples therapy process, and at the end of six months both partners are invited to make another decision about whether to stay or leave. Couples therapy, in turn, is more likely to succeed because both partners are committed to applying themselves fully to the hard work of change.

In the conversations that lead to a choice for the path forward, here’s what discernment counseling offers couples in distress: