Building a Whole Self: Multidimensional Identities 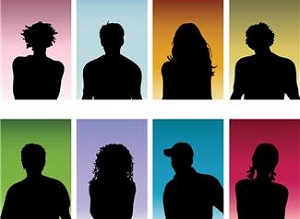 How many times have you found yourself in the situation of being worried or anxious about sharing a part of yourself with others? Too often we’re forced to choose one part of ourselves that we want to share over another part that might be equally as important. This can be extreme or subtle.

For example, teenagers who are both gay and Christian might feel like they can’t be both at the same time. These conflicting identities create a bind for them. At church the young person might be given a very direct message that being gay is wrong. For these teens they know that if they want to celebrate their Christianity with their community, they need to pretend to be straight. Gay community can be equally as complicated. After years of oppression from churches many people who are gay, lesbian, bisexual, transgender, or queer have struggled with Christianity. In this situation these teens might not feel able to express their strong religious beliefs within the gay community. For them, there is no place where they feel totally accepted, totally themselves. This example of split identities is very clear; however, sometimes the ways in which we’re forced to hide parts of ourselves is much more subtle.

In my work, I frequently find men who are struggling with a conflict of identity around gender and gender role. What happens when a straight man has interests or beliefs that are labeled as feminine? For example, if he doesn’t want to fight or he prefers conversations with women over watching sports with men. In our culture there is an assumption that men are going to act masculine. Often men are forced to hide parts of their identity that are not seen as masculine enough. This identity bind is much more subtle but still painful.

We face situations like these every day. Our identities have many facets including our ethnicity, race, religion, and sexual orientation as well as other ways we define ourselves, such as pacifist, good listener, or caregiver. Each of us has parts of our identities that we feel comfortable sharing with strangers and other parts that we only want to share with friends. There are things we are proud of and things we are ashamed of. Our identities are multidimensional; they have many layers and many meanings. Sometimes these identities are hierarchical, and one identity may be more important than all of the others. Understanding what our own multidimensional identity looks like can help us in those moments when not sharing our full self makes us feel invisible.

How do you introduce yourself to someone new after you tell them your name? In the United States we often use our professions to describe who we are to other people, “I’m a teacher/lawyer/electrician/therapist/writer.” As a culture we put a lot of value on employment and jobs, so much that sometimes our jobs become our identities. If you could describe yourself to a stranger as something other than your occupation, what would it be? Maybe it would be a description of an important relationship, such as “I’m a dad/mom/sister/uncle/grandma.” These are only two ways in which we might identify ourselves.

Being proud of ourselves is often much harder than it sounds. We live in a world filled with expectations, some spoken and some unspoken. But just because a part of our identity can’t be seen does not mean that it’s not there. It does mean that you might have to work a little bit harder to give it it’s time in the sun—to find a safe space to share the parts of you that feel invisible. Finding these spaces is an important step towards integrating our identities and feeling whole.

Related articles:
Gender Rules: How Does That Make You Feel?
Learning How to Support Gay Students
The Tiger Hunter