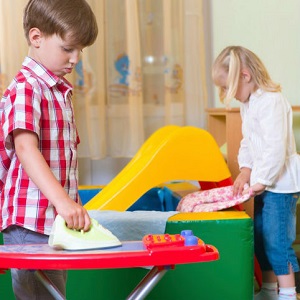 When we are born, and often even before, the big question is, “Is it a boy or a girl?” The way this question was answered when we were born impacts us every day throughout our whole lives. This is the day we are assigned a gender. In our culture we treat boys and girls, and men and women, very differently. Everything is gendered, from toys and clothes, to emotions and ways of thinking. No one is off the hook from these gender scripts; they tell us how to dress, act, and interact with other people (Bem, 1993; Gagne & Tewksbury, 1998; Gagne, Tewksbury, & McGaughey, 1997). Some people fit these scripts well, and some people don’t. But before we can talk about gender, we have to define it.

In our culture we have rules about enacting your gender; they are very rigid rules and very binary rules. If you want to see an example, look at the aisles in the toy store—there is always a pink aisle filled with dolls, and a blue/red/black aisle filled with action figures. Let’s take a step back: What is really the difference between a doll and an action figure? They are both representations of people that allow children to use their imagination to play. But there is a specific judgment attached to the term “doll” and the term “action figure.” A doll is for a girl and an action figure is for a boy. These judgments go one step further to say that it is wrong for a boy to play with a doll. A girl playing with an action figure may not be deemed as harshly, but if that’s the only toys she likes, there is often a judgment that this is unhealthy.

As a culture, we have gendered them; for example, anger is manly and sadness is womanly. The judgment attached is that it is not okay for men to be sad or for women to by angry. Psychologists Michael Thompson and Dan Kindlon believe that the rules attached to being a man in our society hurts boys: “Dan and I felt that boys were emotionally illiterate, burdened by a conception of masculinity that narrowed their lives. They were unable to express their pain, their sense of shame, their sadness, and inadequacy, except through anger” (2004, p. 27). Their book Raising Cain: Protecting the Emotional Life of Boys (2000) describes one way in which gender rules impact children, and consequently adults.

This is a common experience expressed by the people I have worked with. It’s often masked in the fear, “I think there’s something wrong with me because I—” and they describe their experience of having a feeling that is not socially acceptable for their gender. There is nothing wrong with having a broad range of emotions; it is one of the things that make us human. There are more things in common between men and women than there are different, and both men and women have the capacity to feel and express a wide range of emotions. In the example above, the problem isn’t that the person is having feelings they “shouldn’t” be having; the problem is the rigid nature of our gender system that controls our thoughts and behaviors.

When we begin talking about cultural systems, the idea of shifting and changing them can seem overwhelming. However, what if each of us decided to re-imagine our own gender rules? What if we weren’t ashamed that we’re not “manly” or “womanly” enough? Or if we stopped and challenged the impulse to chastise ourselves for not fitting in and, instead, decided if it’s something we even want to fit into? Just by noticing assumptions we and others make regarding gender identity and expression creates more space to be ourselves. What would it be like to intentionally decide what kind of man or woman or transgender person you want to be without shame, guilt, or self-doubt?