10 Indicators That Your Marital Ship Is Sinking 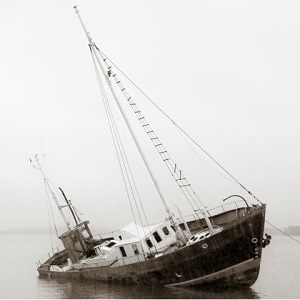 I remember deciding to leave my marriage. After months and months of trying to make it work, I got to a point where I couldn’t stay any longer. It wasn’t my choice to end the marriage, but my partner made it impossible for me to stay. The decision to walk away from something I had been so committed to was torturous because there was a part of me that would not let go of the idea that it could be saved.

I knew the ship was sinking fast, and I tried really hard to scoop out the water, but ultimately I got to a point where I had to jump. With no life raft waiting for me, I chose to plunge into the deep, murky waters of a new life that would be completely different than what I had planned.

People in therapy often ask me how they can know when it’s time to stop trying and give up on saving a marriage. My answer is always the same: There may come a time when you know you can’t stand it any longer. It may coincide with a loss of integrity and a fear of losing yourself in something you intuitively know is not healthy for you. There is no set time frame; it’s different for every person and every unique situation.

It takes a great amount of courage to walk away from a marriage even if you have exhausted all avenues to try and salvage what’s broken. Even when one partner refuses to work on things, the idea of leaving a marriage dead in the water is beyond painful and hard to overcome.

It’s almost always fear and hope that keep people in a terminal marriage for a little too long—the fear of walking away from something too soon, and the hope that it can be resurrected.

The limbo of whether to work on something or walk away can last for weeks, months, or even years. It’s a personal choice that can come only from a place of deep certainty and a readiness to relinquish the fantasy of what could have been.

I have seen many people who don’t technically “leave the marriage” until well after they are divorced. A signature on a page doesn’t define an ending in the same way a marital commitment is much more than a piece of paper.

No one can ever tell you how or when to be done with your marriage, but here are a few indicators that you might be staying in a marriage beyond its expiration date.

Some of these indicators may be hard to swallow or accept, but if they raise your awareness or give you a bar by which to measure the health of your relationship, perhaps it will be easier to put your marriage to rest.