When Your Dream Marriage Is Interrupted by a Sleep Disorder 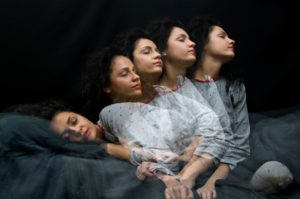 Rona and Crandall have been married for many years. When they first got together, Rona learned Crandall had a history of talking in his sleep. He thought it was just a cool fact about himself, but Rona didn’t think it was cool at all—he scared her sometimes when he shouted and thrashed at invisible demons, but he usually calmed at her touch or the sound of her voice. Sleep talking is fairly common, and they lived with it.

With aging, his conditioned worsened. One night, Rona woke up after he banged her in the head with his elbow. She thought it was an accident, but it began to happen more and more often. When she told him what was happening, he didn’t know what she was talking about. Once or twice his elbow found her eye socket, and that was frightening. She pushed him off and he usually responded, but sometimes she had to push him really hard. The next morning she’d complain about his behavior, and he’d either deny it or get angry.

A few times when Crandall woke during the night to go to the bathroom, he became confused and couldn’t find the bed. Once, Rona woke up to see Crandall pressing his body against the bedroom window; she was scared he would fall out. He was sleepwalking. She was afraid he would hurt himself, maybe fall down the stairs leading to their bedroom, but he laughed and said that would never happen.

They had a nightlight in the bathroom, but to be safe Rona suggested they add another light in the bedroom. Rona thought there was a chance the added light would wake Crandall when he was sleepwalking, but it didn’t seem to have much effect. The attacks on Rona’s head became more frequent, happening a few nights a week and sometimes repeatedly on those nights.

Rona thought Crandall had a sleep disorder. She told him that she didn’t feel safe sleeping with him and would sleep in the spare bedroom. That caught his attention and he decided to consult a sleep doctor. Except he didn’t. Crandall was a procrastinator in general, and consulting a sleep doctor was frightening. He wanted to consult “the best” sleep doctor. When Rona asked him how he was going to find the right doctor, he said he hadn’t thought about it, so Rona suggested he consult his physician and ask for a referral. Crandall got angry, accused Rona of making a big deal out of nothing, and denied his strange behavior, but later agreed some of what she said was accurate. Crandall was very frightened; as many people do, he denied his fear and felt mad and suspicious instead.

Crandall had a problem with REM sleep—REM, which stands for rapid eye movement, is a normal state of sleep that happens several times a night and is characterized by vivid dreaming. The eyes move rapidly, and often the body is restless; pulse and breathing rates speed up, but ordinarily the person remains asleep. During REM sleep, voluntary movement of the body is suppressed.

A REM sleep disorder describes a condition where body movement is not suppressed and the person acts out dreams by shouting or thrashing or sleepwalking, or even by attacking a sleep partner. Often the REM disorder is discovered not by the sleeper but by the partner. REM sleep behavior disorder, or RBD, can be dangerous to both the sleeper and the partner.

RBD has punched a hole in the intimacies of their marriage. They will have to work to find other ways to nourish their bond.

A person with RBD consults a sleep doctor for appropriate diagnosis and treatment and to see if there are underlying neurological or other issues needing treatment. If the person is on several medications, RBD could signal a drug interaction problem. Medication can also help with RBD.

RBD presents serious safety issues for both Rona and Crandall. Crandall’s sleep environment will have to be made safe. Potentially dangerous objects must be removed from the room, and stairway and window protections may be necessary. Until Crandall’s treatment is successfully under way, Rona would be wise to sleep in the spare bedroom. Crandall might find sleeping separately hard to handle; Rona may adjust more easily.

The emotional fallout may be tough. Rona can’t trust Crandall at night, and now she can’t sleep as soundly as she needs. Her body tells her to stay away from him. He can’t trust himself not to hurt her. RBD has punched a hole in the intimacies of their marriage. They will have to work to find other ways to nourish their bond.

RBD is a condition best treated by a medical doctor, but the effects of living with RBD need other kinds of intervention too. Perhaps Rona and Crandall can consult a marriage counselor or individual therapists to work on alleviating the harm caused by RBD, which places them both in physical and emotional jeopardy. They need to develop different kinds of closeness, ways, and places they can feel safe together again.

Note: The couple depicted in the preceding account is fictional and used for illustrative purposes only.