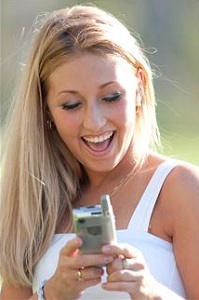 Texting has, in many ways, made communication easier by helping people avoid long, unpleasant phone conversations and making a quick “Hello” much easier. According to the Pew Research Center, 72% of teenagers text regularly, and one in three sends more than 100 texts per day. Clearly, texting is the preferred method of communication among young people, and that trend is moving upward toward adults, who are also texting much more frequently. While texting hasn’t been around long enough for researchers to study its long-term effects on communication, there is circumstantial evidence that it is rapidly altering the ways people communicate with one another both via text and in person.

Texting increases the frequency of small talk and can be a great asset to people beginning to form a friendship; they may be much more comfortable texting each other witty one-liners than they are picking up the phone and calling. But texting is, almost by definition, surface-level communication. When people communicate primarily via text, they’re much less likely to have meaningful conversations.

People know they’re using improper grammar when they text; it’s merely a shortcut that enables them to relay a message quickly and effectively. But over time, the way we communicate—even if we know the way we communicate is “technically” wrong—affects the way we think. The result is that people who have grown up texting may have much poorer writing skills than people who regularly communicate using grammatically correct sentences either in person, over the phone, or via email. Even worse, they may lose their ability to modify their tone and style depending upon who they talk to. Many employers complain that entry-level hires have no idea how to send a business email or communicate appropriately to superiors.

Texting is real-time communication but is not in person. This creates an odd situation in which people feel compelled to respond immediately via text, but they aren’t really participating in an ongoing, progressively deepening conversation. The instant gratification of texting can lead to incredible impatience, even aggression. But when people are in person, the requirement of communicating immediately can be daunting for people communicating primarily via text. Thus texting can inhibit both in-person communication and texting itself.

Unlike phone calls, there are no clear rules about when it’s acceptable to text. And because texting doesn’t result in an angry person answering on the other end, many people feel more comfortable texting at any time and in any circumstance. The result is a decrease in privacy and social boundaries. People may text in the middle of the night or while someone is on vacation and expect an immediate response, because of the impatience texting encourages. The result is a blurring of the lines between public and private. While a couple might previously expect no interruptions on a vacation or honeymoon, they can now anticipate receiving and responding to texts. Because texting is not old enough for psychologists to know how this affects intimacy, we can only guess at its long-term effects on relationships.