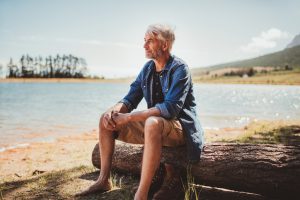 Pseudodementia is a type of cognitive impairment that mimics dementia but actually occurs due to the presence of a mood-related mental health concern, most often depression. This condition is typically seen in older individuals.

The term pseudodementia became widely used following Leslie Kiloh’s 1961 paper, which described cases of people in treatment who experienced cognitive deficits similar to those seen in people with dementia. The cognitive decline experienced in these cases was actually due to mental health conditions rather than those of the central nervous system. Kiloh pointed out the potential reversibility of cognitive impairment in many of these cases, making the paper significant at a time when dementia was considered a condition that could not be reversed.

Some professionals and experts in the field argue against the use of this term, because it is does not offer clear, objective criteria for diagnosis and because the prefix “pseudo-” may lead to the incorrect assumption that the dementia is not real. However, the term pseudodementia is still considered to be useful in reference to cognitive decline that results specifically from depression and other mental health issues, especially in the development of treatment plans.

Distinguishing between Dementia and Pseudodementia

It may be difficult for medical providers to differentiate between dementia and pseudodementia, partially because there is significant overlap between the symptoms of each condition and partially because some other forms of dementia, such as Alzheimer’s disease and Parkinson’s disease dementia, also involve mood symptoms similar to those that characterize depression.

Correctly identifying the condition is an essential aspect of treatment, as treatment for pseudodementia, which may be reversible, differs from treatment approaches designed for other types of dementia, which are generally progressive and often not able to be reversed. Incorrectly diagnosing pseudodementia as dementia may also lead to unnecessary neurological tests and procedures.

The Geriatric Depression Scale (GDS) is one measure used to differentiate between the two conditions, and it is generally the most useful when it is paired with information about an individual’s history and current functioning. On the GDS, individuals with dementia may show a wider range of emotions and may also display emotions that are not congruent with the situation—laughing during a somber event, such as a memorial, for example.

Individuals with pseudodementia might experience symptoms such as delayed motor response, anxiety, and feelings of helplessness and hopelessness. They may be more likely to wake early and be unable to sleep, and they are also likely to experience other symptoms of depression. These symptoms may include:

The risk factors for pseudodementia are much the same as those for depression. Among them are gender (women are  statistically more likely to develop depression), family history, divorce, and lower socioeconomic status. People of all ages can develop depression, but pseudodementia is usually seen in adults in middle age or older. Some researchers have suggested that pseudodementia may occur when a mood-related condition develops in a brain that is already somewhat compromised due to advanced age.

Cognitive behavioral therapy and interpersonal therapy are two specific treatments that have been found to be effective for the treatment of depression, and these treatments may also be beneficial in the treatment of pseudodementia. Cognitive behavioral therapy (CBT) involves exploring and changing thought patterns and behaviors in order to improve one’s mood. Interpersonal therapy focuses on the exploration of an individual’s relationships and identifying any ways in which they may be contributing to feelings of depression.