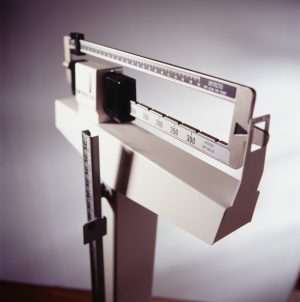 Obesity, the state of having excess adipose (fat) tissue, is a medical term that is the subject of some debate. Though obesity was officially classified as a disease by the American Medical Association in 2013, this classification has generated much controversy, both because a number of factors—genetics among them—can contribute to a person’s body type and size and because a common diagnostic tool, the body mass index (BMI), is known by many to be flawed.

A person who has what health care professionals consider to be an excess amount of body fat, according to medical diagnostic scales, may be classified as “overweight.” A person whose weight is greater than 20% of their ideal weight—a measurement that should take age, build, height, and gender into account—may be termed “obese.”

Much attention has been drawn to obesity in recent years, after a 2004 study sponsored by the Centers for Disease Control and Prevention (CDC) published statements indicating about 350,000 deaths each year were somehow associated with being overweight or obese. These findings seemed to imply that obesity was second only to smoking as a cause of preventable death. When the same findings were analyzed further for greater accuracy, however, the true number of deaths associated with obesity was only about 25,000. This number indicates that being overweight or obese may not be necessarily be the grave health concern it is often suggested to be.

Different doctors and medical associations may use various scales to determine obesity, but the BMI scale is the most common. This scale provides an approximation of body mass based upon height and weight, and people who have a BMI higher than 30 are considered obese. However, many experts have challenged the BMI, in part because it fails to take into account a person’s waist size, unique body type, and musculature, all of which may be better indicators of health than a numeric scale that does not allow for much individual deviation.

A diet with too many calories or a sedentary lifestyle can lead to obesity. Other factors that can contribute to the development of obesity include:

An increasing number of experts argue that bodies come in a range of types and shapes and that a person’s size may be determined by genetics more than lifestyle. For example, some individuals may be active more days than they are not and follow an eating plan that any nutritionist would consider “healthy” but still be of a size that leads them to be medically classified as obese. Other individuals may eat foods largely considered to be unhealthy, consume calories in excess of the daily recommendation, and be largely sedentary but still be medically classified as “underweight.” Many experts agree that size may be less of a concern to physical health than a person’s general fitness level.

The Effects of Obesity

Several recent studies found, in fact, that people who were considered overweight or mildly obese experienced better outcomes from a wide range of health conditions, pneumonia, cancer, stroke, and heart disease among them. In women, greater weight is associated with lower risk of osteoporosis, while elderly individuals who are heavier may have better health.

Diagnosing a person as “obese” based on their height/weight ratio can have the effect of pathologizing a person’s size. Many doctors may focus solely on a person’s weight, even when it has no negative impact on their health, and neglect other concerns. Some doctors may not treat individuals who are diagnosed with obesity until they have lost weight. Because of this, many people may avoid visiting the doctor or develop health concerns that are ignored or go untreated, and this may be one contributing factor to a higher prevalence of health concerns among people who are considered obese.

Sizeism, or weight bias, is quite common. In much of American society, thinness is equated with beauty. Advice on slimming down and advertisements for weight-loss products permeate the media and popular culture. Most models and actors meet the societal standards of beauty, and it is common to hear about the diets that Hollywood stars maintain in order to remain thin. Despite the fact that over two-thirds of Americans are considered to be “overweight” or obese, larger bodies are disproportionately under-represented in the media, and many people falsely assume obesity is the result of laziness, inactivity, or overeating.

People of size portrayed in the media are frequently shown in a negative light. Movies such as The Nutty Professor and Shallow Hal involve a thin actor wearing a fat suit in order to get laughs. When a person’s size is not the target of a joke, the messages about them are often otherwise negative. Research shows, for example, cartoon characters who are of a size that is considered overweight are more often portrayed as unintelligent, unattractive, and unhappy.

When shows do feature people of size, the focus is often on their attempts to lose weight, and any weight loss is referenced often. The Biggest Loser and My 600-lb Life show people struggling to diet and exercise in order to lose weight. Additionally, people with larger bodies are defined by their size in a way those with thin privilege are not. The movie Pitch Perfect, for instance, features Rebel Wilson playing a character called “Fat Amy.” Further, overweight actors are often encouraged to lose weight, and praised when they do so, as if their body type is more important than other aspects of their career, such as their talent and ability. The overwhelming message in the media seems to be that people who have larger bodies are inherently unhappy and unhealthy and should strive to lose weight in order to fit the societal standards of beauty and be happy.

Fortunately, the issue of sizeism in popular culture has received an increasing amount of attention over the past few years, and more diverse body types are being portrayed in film and television. The term “body positivity” is gaining traction, and people are encouraging acceptance and representation of all body types and sizes. Television shows such as Girls and The Mindy Project feature a lead female character who is strong, smart, and not afraid to embrace her body and sexuality despite the fact that she does not adhere to typical Hollywood standards of beauty. Other shows such as Mike and Molly, This Is Us, and Drop Dead Diva include main characters who have larger bodies. Although these shows have been criticized for focusing on the weight of the characters, others argue inclusion of larger body types is a positive step in the right direction, though more and better representation is still needed.

It may be the case that certain mental health concerns contribute to obesity. Binge eating, for example, is an eating disorder that causes people to eat excessive quantities of food in a short period of time, often in secret, may lead to obesity. When a person binge eats, has become addicted to food—certain foods in particular, such as sugary or salty foods—, or eats to deal with with emotional distress, a mental health professional may help them address these issues. However, not every person who is considered obese by medical professionals binge eats or is addicted to food. Further, it is not the case that every person who is considered obese experiences distress due to their size.

People with obesity may develop eating disorders such as anorexia and bulimia. Many people erroneously believe that those who have eating disorders are extremely thin, and this assumption may prevent individuals experiencing these concerns from seeking help or receiving adequate treatment.

Obesity can contribute to the development of mental health issues, but it is important to note that the stigma surrounding obesity and the effects of weight-based discrimination are more likely to be the causes of mental health concerns, not a person’s weight.

Societal attitudes regarding size are proven to have a negative impact on emotional well-being. Several studies have shown that people who meet social norms of beauty and attractiveness have an easier time getting a job and are viewed more positively by others. Size discrimination is one of the most prevalent forms of discrimination in the United States, and heavier people may face any number of negative assumptions about their intelligence, abilities, and/or hygiene. Heavier children are more likely to be bullied, and heavier people of any age may face social ostracism, among other effects of weight-based stigma (often termed fatphobia).

The pressure to have a thin body can lead to depression and anxiety, among other concerns. Societal assumptions about weight loss may include a number of harmful ideas, such as the concept that every person should aspire to reach the same weight and shape, and these are also likely to have a negative impact on a person’s emotional health. The term “overweight” itself supports this idea (and is considered by many to be problematic) as it implies there is an ideal body all people should work toward and that people who have different (“over”) bodies are somehow “wrong.”

The Politics of Obesity

Not everyone considers obesity a health concern, and many strongly disagree with its classification as a disease. Some advocates argue that placing such emphasis on body weight is unnecessary. The Health at Every Size movement—titled after the book of the same name—works to support body diversity in recognition of the fact that healthy bodies come in all sizes and argues in favor of advocating healthy lifestyle choices rather than focusing on body size.

Many medical experts and health care professionals recommend activity and balanced eating rather than diet or severe exercise regimes, pointing out that diets typically do not work and that inflammation, a harmful effect of continuously losing and regaining weight, can contribute to the development of many health conditions.

People who do wish to lose weight may find it helpful to seek advice from a nutritionist or other professional to do so in a way that is not harmful to their physical health or emotional well-being. While some may find crash dieting effective for a short period of time, research shows that making lifestyle changes for greater fitness and nutrition are more likely to lead to health and wellness than simply losing weight.