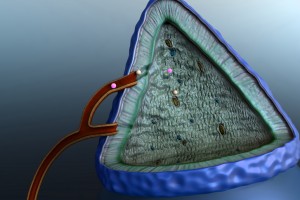 Norepinephrine, also referred to noradrenaline, is a chemical messenger. It functions both as a neurotransmitter and a hormone within the body and is released in response to stress.

Norepinephrine can be classified as both a phenethylamine and a catecholamine. While it may be directly synthesized from dopamine, all catecholamines—including norepinephrine and dopamine—ultimately come from the amino acid tyrosine.

Norepinephrine is produced by adrenal glands or by noradrenergic neurons, which are found chiefly in the locus coeruleus of the brain. When secreted by the adrenal medulla, norepinephrine is released directly into the bloodstream and functions as a hormone. When secreted by noradrenergic neurons, it acts as a neurotransmitter, directly affecting the central and sympathetic nervous systems.

The Function of Norepinephrine

The physiological changes induced by a stressful event may trigger the release of norepinephrine within the body. In turn, norepinephrine activates target cells in specialized tissues to prepare the body to effectively deal with the stress being experienced. It is a crucial component of the body’s fight or flight response.

When faced with an acute threat, norepinephrine is able to:

These processes help prepare the body to confront or retreat from any perceived threat.

Norepinephrine is believed to play a vital role in the maintenance of good mental health. Depression, one of the most common mental health issues people face today, has been linked to the norepinephrine system. Though medical science has not yet revealed all of the specific biochemical mechanisms underlying depression, research does show norepinephrine, serotonin, the noradrenergic system, and the serotonergic system are all directly involved in the action of antidepressant medications.

Some mental health professionals believe that chemical imbalances between norepinephrine and other neurotransmitters (serotonin, GABA, and dopamine) may be associated with the development of anxiety and other issues related to mood.

Norepinephrine and dopamine also play important roles in attention and focus. Current research suggests that low levels of these chemical messengers may contribute to conditions such as attention deficit hyperactivity and Alzheimer’s disease. Other mental health conditions believed to be influenced by chemical imbalances in the brain include schizophrenia, bipolar, and obsessive-compulsive behaviors.

Abnormal levels of norepinephrine have also been linked to:

Norepinephrine is used widely in the medical field. It is often used to treat low blood pressure (hypotension), particularly during surgical operations or in emergency medical situations such as septic shock or neurogenic shock.

SNRIs are used to treat a wide range of concerns, including depression, anxiety, obsessive compulsions, fibromyalgia, attention deficit hyperactivity, and neuropathic pain. Because SNRIs tend to be better tolerated and often have a higher safety profile for those receiving treatment, they may replace first-generation drugs such as monoamine oxidase inhibitors (MAOIs) and tricyclic antidepressants (TCAs).