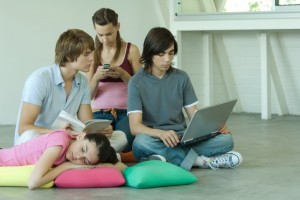 Internet addiction (IAD) has been the topic of much interest in recent years. Young people who develop IAD often report significant social and academic difficulties and may also be at risk for other psychological issues. Some research has suggested anxiety and depression are higher among those with IAD, while others have reported mixed results. Additionally, some studies have found the number of hours spent online directly predicts symptoms of IAD, but these findings are also inconsistent across literature.

To get a clear understanding of the symptoms of IAD and, more specifically, the biological indicators of IAD, Hong-Xia Zhang of the Department of Psychological Medicine at Fudan University in China recently led a study that looked at hormone levels, anxiety, and depression in a group of young people experiencing IAD. The participants consisted of 15 adolescents without IAD and 20 who had been diagnosed with IAD. They completed self-reports of anxiety and depression and their blood levels of serotonin, dopamine, and norepinephrine were tested.

Zhang believes this study clearly shows an association between low norepinephrine, increased depression/anxiety and IAD. However, these findings are limited in several ways. First, the sample size was very small, which could account for some errors in the results. The age of the participants was also a limitation. Because those studied were adolescents, their age may have had a potential influence on hormone levels. Finally, this study did not look at follow-up assessments and so it could not provide longitudinal data.

“Clearly,” added Zhang, “Larger longitudinal samples of boys and girls, across childhood, adolescence, and young adulthood, carefully defined for IAD and key comorbid disorders, and obtained from multiple centers would address these limitations.” Until that time, these findings add to the existing body of research on IAD.