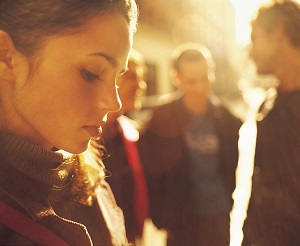 Homophobia has historically been defined as a fear of being around people who identify as lesbian, gay, bisexual, queer, or another non-heterosexual orientation, or the fear of becoming gay. In contemporary usage, however, the term is  most commonly used to describe a person who dislikes, abuses, or attempts to “convert” people who are not heterosexual.

While true phobias are typically characterized by a chronic avoidance of the item causing the phobic reaction, people who are homophobic generally do not exhibit this type of behavior. Instead, they may actively seek out people who are gay in an attempt to convert them or intimidate them. Homophobic behaviors may also manifest toward people who are not actually gay but who are believed to be so, such as men who are considered effeminate, women who work in construction, and other people who in some way align with homophobic stereotypes.

Homophobia frequently has an institutional origin. Religious organizations that believe homosexuality to be sinful are more likely to produce members with homophobic tendencies. Similarly, nations that outlaw so-called “homosexual behavior” or otherwise stigmatize homosexuality are far more likely to have a homophobic population. Negative media stereotypes of gay people may also perpetuate homophobia, and there is some evidence that homophobic celebrities can cultivate homophobic attitudes in their fans.

Homophobia may correlate strongly with age, political affiliation, religion, and educational level. Young people, those with higher levels of education, those who are non-religious or who belong to liberal congregations, and those with left-leaning political orientations are less likely to display homophobic attitudes. However, this correlation is not absolute. The American conservative group Log Cabin Republicans, for example, supports gay rights.

Although homosexuality is now widely known to be a natural expression of human sexuality, in the past, homosexual behavior was often condemned. Society’s focus on homosexuality sharpened during the 1860s and 1870s, when European public officials recognized that some individuals centered their lives on the pursuit of sexual pleasure rather than on having a household, family, or children. These individuals were regarded as sexual deviants and classified based on sexual behavior, and homosexuals represented a major class within this population. Shortly afterward, these so-called “sexual deviants” became the targets of psychiatric, medical, and legal intervention, and in the 1870s, many began to band together to fight the social and political influences that sought to criminalize sodomy and other “deviant” acts.

Homosexual people faced a great deal of persecution in 20th century America. Economic crises led many individuals to search for employment in larger cities, away from their homes and families. Many found housing in shared flats, industrial dormitories, or other same-sex housing facilities, and those who were not heterosexual were often able to locate each other and act on their desires, away from family and religious condemnation.

However, the 1950s saw many gay and lesbian people entrapped, brutalized, and even raped by the police. The end of World War II saw the dishonorable discharge of thousands of homosexual servicemen and women, who were often simply dumped in the port cities of San Francisco, New York, and Los Angeles. Under executive order by President Eisenhower, one’s sexual orientation was a valid reason to be fired from a job, and the United States Postal Service aided these dismissals by tracing the mail of those suspected to be homosexual in an attempt to gather evidence for termination.

Historic events likely to have facilitated and furthered homophobic behavior:

Is There Treatment for Homophobia?

Because homophobia is rarely used as an actual diagnosis and is more often a pejorative for people with anti-gay sentiments, people who are homophobic rarely seek treatment. Instead, social awareness campaigns attempt to combat homophobia, which often stems from a lack of education or exposure. Amnesty International and The Human Rights Campaign are two notable organizations that have scheduled anti-homophobia demonstrations. Pride, an annual LGBTQI community event, welcomes allies, and heterosexual people who attend Pride events may find their stereotypes challenged upon exposure to a wide range of diversity. Because exposure to gay people is correlated with fewer anti-gay sentiments, people with gay friends and/or family members may have a deeper understanding of human sexuality and more knowledge about different sexual orientations.

Education on human sexuality, especially in youth, can help prevent homophobic behaviors and beliefs from developing. For example, the Same Difference program, which aims to reduce homophobia and celebrate diversity in schools, has been shown to challenge the stereotypes of participants and lead them to develop stronger empathy for others along with a greater understanding of human sexuality.

A person might also help reduce homophobic attitudes by challenging or avoiding microaggressions against people who are not heterosexual. Microaggressions are a subtle, often unconscious, form of oppression that send the message that certain groups or individuals are inferior. The use of remarks such as “That’s so gay” is one form of microaggression that may contribute to a homophobic culture. A person might casually use “gay” as an insult without realizing the harmful potential of the remark, and avoiding such language can help create an inclusive culture where individuals are accepted no matter their sexual orientation.

Avoiding heteronormative language is another factor that may contribute to the reduction of homophobia. When a person automatically assumes that a man’s date will be a woman or that a person must identify as either male or female, that person is supporting, consciously or subconsciously, the belief in a gender binary and that heterosexual people are the norm. Even if the person making the assumption is not actually homophobic, the heteronormative assumption can still have the effect of perpetuating homophobia.