History Repeats Itself, Part I: The Persistent Influence of Our First Families 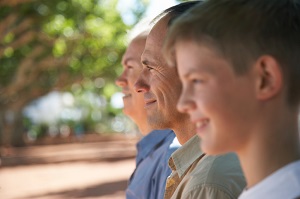 History repeats itself, especially in our psychological lives and in our relationships.

Although this fact has been recognized for millennia, one of its earliest formulations in the field of psychology is called repetition compulsion. According to Freud (1914) repetition compulsion is a psychological phenomenon in which a person repeats a traumatic event or its circumstances over and over again, either in real life or in dreams.

Does this idea resonate with you? Are there patterns you tend to repeat in your relational life that you just can’t seem to break or, at the very least, have been slow in changing?

Although Freud attempted many explanations of this phenomenon, some more satisfactory than others, it was only in later years that we’ve gained a fuller picture of why these sorts of events are repeated.

Over the course of our lives, we interact with many different systems. However, our family of origin – the first system we encounter – has the most pervasive influence on our emotional and physical development and future relationships. As we grow up, our parents teach us what’s good or bad, valued or worthless, important or unimportant. In many cases, we learn this from what our parents say and do. In other cases, we learn more indirectly, impacted by our family’s emotional atmosphere [1].

Dorothy was a 45-year-old woman who came to psychotherapy knowing exactly what the problem was but with no idea how to solve it. Mostly, I was struck by her exhaustion – she had deep circles beneath her eyes and looked completely drained.

“I’m not living my own life anymore,” she quickly told me.

As we talked, I learned that Dorothy was exclusively caring for her aging mother, in spite of the fact that her two sisters lived less than an hour away. She visited her mother morning and night. Most days, they talked on the phone ten times. Dorothy’s mother was emotionally abusive, often calling her a terrible, hateful daughter; at other times, she phoned Dorothy’s husband to complain about Dorothy’s failings. Dorothy never confronted her mother or insisted that her sisters contribute to their mother’s care.

Dorothy experienced ongoing emotional neglect during her childhood. Although her mother was well intentioned, she’d suffered from severe mental health issues. Dorothy recounted innumerable incidents in which she sought, without success, to elicit her mother’s love. “I remember her lying on the couch almost every afternoon when I got home from school. She’d been crying and hadn’t changed out of her pajamas.”

After a brief pause, I asked, “You just wanted her to notice you?”

Dorothy sighed. “Yes,” she continued, “but no matter what I did, that never happened. I brought home artwork from school, cleaned up the house. Several times, I even cooked dinner. But my mother never got off the couch or thanked me for my effort.”

“I wonder,” I offered, “whether you’re still trying to get her to love you now.” Dorothy began to cry, a first lightly but then in more heavily, making contact with deeply held but rarely acknowledged feelings of disappointment and loss.

Dorothy understood that she was repeating a pattern from her early childhood. But change did not come quickly. Over a series of meetings, we discussed the strong emotional pull Dorothy felt to recapture her mother’s love and attention – though she freely admitted that she’d never had these in the first place. Several months later, Dorothy came in and said, “My mother started insulting me again on the phone today.”

“And?” I said, waiting for her to respond.

“And I told her, ‘If you can’t speak to me kindly, then we’ll have to talk another time. Maybe tomorrow when you’re feeling better.’”

“What happened next?” I asked

Dorothy sighed. “She kept going, like we expected she would. But I rose to the occasion. I said, ‘I’m sorry mother, we’ll have to talk later,’ and I hung up the phone.”

This article will be continued in future installments.