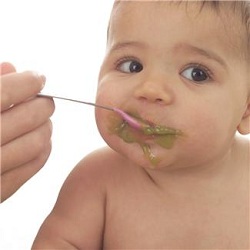 You are what you eat, as the popular saying goes. And now a new study suggests that your diet as an infant may in fact determine how smart you will be when you grow older. The study, published in the European Journal of Epidemiology, found that infants who ate healthy foods had higher IQ scores by age 8 than those who ate less healthy foods. The study focused on diet at 6, 15, and 24 months of age. The researchers then followed up with subjects at age 8 years. A little over 7,000 children were included in the study.

The unhealthiest foods that led to an IQ of 1-2 points lower at all ages included “biscuits, chocolate, sweets, soda, [and] crisps,” according to the study abstract. Other types of food varied at different ages in how they impacted IQ scores. For example, at 6 months of age, a “breastfeeding pattern,” along with foods like “herbs, legumes, cheese, raw fruit and vegetables” at 15 and 24 months were linked to IQs about 1-2 points higher.

Foods such as “meat, cooked vegetables, [and] desserts” were found at 6 months to have a positive association with higher IQs, but this type of food style didn’t seem to have any associations with IQ at 15 and 24 months. Other types of foods seemed at first to negatively impact IQ but later appeared to increase IQ. For example, at 6 and 15 months of age, “ready-prepared baby foods” were found to negatively impact IQ to some extent, but at 24 months, “ready-to-eat foods” had a positive association with IQ.

“This study suggests that dietary patterns from 6 to 24 months may have a small but persistent effect on IQ at 8 years,” according to the study abstract.

Although lead researcher Lisa Smithers at the University of Adelaide stated in a media release that the IQ differences were not major, the study still suggests a need to put more emphasis on good nutrition at a young age.

This study is in no way isolated. Various other studies support a link between breastfeeding and IQ, as well as overall nutrition and IQ.

One 2011 study featured in a Scientific American article found that infants who were breastfed for more than 6 months had an average higher IQ of 3.8 points over infants who were bottlefed. However, the study suggests the IQ difference is not mainly due to nutrients in the milk but the closer biological interaction among infants and mothers during breastfeeding. This finding is further demonstrated by another study mentioned later in the article, where brain wave activity was recorded for bottlefed babies who fed on breast milk versus formula compared with breastfed babies. Out of the three groups, breastfed babies had different brain wave activity than both bottlefed groups, even though one bottlefed group still used breast milk.

Still more studies suggest that breastfeeding can enhance IQ. Research completed by Oxford University and Essex University “found that as little as four weeks of breastfeeding for a newborn baby has a significant effect on brain development, which persists until the child is at least 14 years old,” according to a ScienceDaily article. Researchers took into account other differences when comparing breastfed to non-breastfed children, such as mother’s age, marital status, job status, home situation, and education.

Various studies support a link between overall nutrition and IQ in children as well. For example, one study from 2011 suggests that young children who eat foods that are processed and are high in fats and sugars could have a lower IQ, whereas children who eat foods high in nutrients and vitamins tend to have a higher IQ, according to a PhysOrg article. Results seemed to show that diet was most important up until age 3 especially and that diet changes after age 3 didn’t impact IQ as much.

More research mentioned in a Mayo Clinic article links fish and omega-3 fatty acids to higher IQ in children as well. The research suggests that pregnant women with a higher intake of fish tend to have children with higher IQs, at least up until age 3. However, pregnant women also have to be aware of the mercury content in fish, because too much mercury could be harmful.

Nutrition and mental health experts have conflicting views when it comes to the newest study suggesting a link between consuming certain foods and increased IQ in infants.

Holly Stokes, a life coach and “the brain trainer,” said in an email that it’s important to take into account other factors that could have contributed to the higher IQs in the study as well. “It’s tempting to say that higher nutrition must then cause higher IQ,” Stokes said. “However, there could be other factors involved. For example, the IQ of the parents. It’s quite likely that the parents who are feeding their children better are better informed, maybe have researched on their own, and they themselves have a higher IQ than the parents who are not feeding their children as well. There is also some evidence to suggest that IQ has to do with socio-economic status as well.”

Scott Carroll, a psychiatrist with dual board certifications in adult and child and adolescent psychiatry and an assistant professor at the University of New Mexico School of Medicine, said in an email that this study brings up some important points about nutrition. “While 2 IQ points is actually within the usual standard error of most IQ tests, just the fact that you could demonstrate a statistically significant finding from rather minor dietary changes is a big deal,” Carroll said. “We certainly know that malnutrition has severe negative effects on IQ. The hard part about doing a study like this is that smarter parents often make healthier choices in food, which you have to statistically control for in this type of study.

“Statistically controlling for stuff like that often lowers the ‘effective result’ of the study,” he added. “Basically, if you took two high IQ families (IQ is highly genetic) with babies and fed them the two different diets with all other things being equal, you’d get a 2 IQ point difference on average. While that may not seem like much, as a soon to be parent (my wife is 4 months pregnant), we will be even more careful about feeding her the healthiest food possible.”

He said that since research already shows a link between a nutritious diet and good health, as well as a decrease in obesity, an increased IQ is just another benefit and does support an emphasis on certain food choices for infants. He has some suggestions about diet and lifestyle choices for parents and infants to ensure that their children have a healthy and growing IQ.

“Breastfeeding is clearly ideal for many reasons, but making sure mom is properly fed is important as well,” Carroll said. “Longer breastfeeding, up to 18 or more months even if the child does eat some solid foods, also helps. Key things for mom’s died include B vitamins, fish oil (must be mercury free since mercury is highly toxic), [and a] rich diet in terms of a variety of high quality fruits and vegetables. Limit the sugar content of their food. Personally, I strongly believe in eating organic even though the research on it is limited.”

“Other keys include having a secure attachment between the baby and primary caregiver, because insecure or disorganized attachment clearly affects the brain wiring in bad ways,” he added. “Having a stimulant-rich environment (bright colors, toys, etc.) and lots of time with parents with soothing verbal communication have also been scientifically shown to help.”

Lisa Hugh, a registered dietitian and mother of two boys under 3 years old (she breastfed both), said in an email that the IQ result alone isn’t enough to promote certain eating habits, but healthy eating has many other benefits as well.

“I don’t think a few IQ points alone is enough evidence to support one way of feeding,” Hugh said. “However, many studies (various sources and designs) indicate that healthy eating offers many benefits: brain size, vision development, acceptance of more tastes/textures, healthy body weight, better performance in school. All of these advantages together are reason to promote healthy eating.”

She has some diet suggestions for infants in order to promote higher IQs: “[Breastfeed] for as long as possible, minimize processed foods, give foods from all food groups (except in cases of allergy, illness, food sensitivities, food intolerances, cultural preferences, etc), give kids a variety of tastes/colors/textures/cups/plates/etc. to keep meals/food interesting and to expose them to different foods,” Hugh said. “Maintain a regular daily schedule as much as possible.”

“Each child/family/parent is unique,” she added. “There is no one absolute best way of feeding a child. Parents have to do what is best given their circumstances/needs.”