How Therapy Dogs Can Improve Well-Being 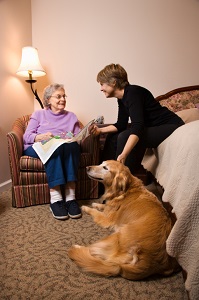 Talk to any pet lover and he or she will tell you that pets make life richer and better. But pets aren’t just a source of fun and an occasional source of extra work. Animals can play important roles in helping people recover from illness, making medical visits less stressful, and relieving social isolation. Although a wide variety of animals have been used in therapeutic settings, therapy dogs are the most popular option, and there’s strong evidence that a therapy dog can make a huge difference in a person’s quality of life.

What Are Therapy Dogs?

A therapy dog is any dog used in a therapeutic setting to improve treatment outcomes. Some are trained to complete specific tasks, while others are just well-behaved dogs. There’s no specific breed, size, or age requirement for a dog to become a therapy dog. Some are raised and specifically trained to provide therapeutic services, while others are just pets visiting a nursing home or rehabilitation center over the weekend.

What Do They Do?

Therapy dogs are hugely diverse and can fill a wide variety of functions. Some visit people living in nursing homes and respite facilities, providing companionship and a brief opportunity to pet an animal. Others work with children in crisis. For example, some child-abuse centers provide a chance for children to talk to therapy dogs, rather than people, about their abuse. Some prisons have established therapeutic pet-ownership programs in which a prisoner cares for an abandoned or unwanted dog or puppy. Some dogs are highly trained and work as seizure-alert dogs for people with epilepsy or as assistance dogs for people with sensory limitations. Dogs also have been used to help war veterans experiencing posttraumatic stress and other issues. These dogs sometimes undergo years of training before they’re placed with an owner.

What Are the Benefits?

Dogs have a soothing effect on people. The simple act of petting a dog can ease symptoms of depression and anxiety. The benefits of therapy dogs are overwhelming, and include:

Can Your Dog Be a Therapy Dog?

There are several organizations that certify dogs as therapy dogs, but not all dogs are certified. Some nursing homes, for example, recruit owners of well-behaved dogs to bring their dogs in a few times a week or month. In most cases, though, your dog will need to pass a temperament test and show no signs of aggression or fear toward people or other animals. Some dogs may need more intense training. For example, therapy dogs that work with children might have to learn how to tolerate being hugged tightly and master the art of not jumping on a rambunctious child.