Conflicts in Older Couples May be Signs of Cognitive Impairment 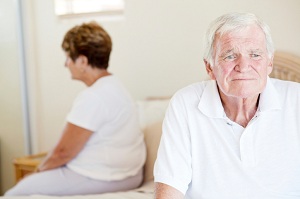 Couples who have been married for decades seem to know the secret to successful relationships. But when couples bicker and fight after years of being together, is it a sign of an unhappy relationship or cognitive decline? According to a recent article, children and caregivers of couples who exhibit tension and anger may merely be witnessing what has always been there, just with different eyes. When children reach adulthood and enter into their own relationships, they may begin to view their parents’ relationship with different, often more critical, eyes. This could shed new light on not-so-subtle patterns between their parents that have always existed.

But when fighting, arguing, or hostility are new behaviors, they may signify a deeper problem. Mild cognitive impairment (MCI) is an insidious, subtle offender that creeps up on people. Individuals who begin to forget things, or become overwhelmed by things that used to come easily, may hide their impairment from those closest to them out of fear and shame. When a wife who used to be able to tackle all the household chores suddenly stops doing them, her husband may think she is being lazy. Likewise, when a husband who used to enjoy socializing becomes reclusive, his wife may respond with anger and hurt. These mixed signals can increase hostility and tension in the relationship.

Other indications are suspicion and jealousy. Delusions of infidelity or callousness can cause someone to become accusatory of their spouse. This can lead to resentments. And even though they may be unfounded, they set the stage for anger and conflict. The same can happen with physical health declines. Many illnesses can decrease sexual arousal and stifle sexual intimacy. Without that type of connection, couples can become emotionally and physically distant. Dr. Nancy K. Scholssberg, a professor of counseling psychology at the University of Maryland, knows that even though fighting isn’t the answer to the fear or uncertainty that accompanies illness, it is often the most commonly used coping strategy. “Fighting may come from a misguided notion that you can regain power by asserting it over your spouse,” said Schlossberg. “It doesn’t work, it’s false power – but they’ll [spouses] try anything.” Add to that the stress of caring for an ailing spouse, and you’ve got a recipe for disaster. Even though MCI may not be to blame for the battles in most relationships, it is especially important for clinicians to explore this possibility when working with older couples.