Born in Indiana in 1897, Gordon Allport was one of four children. His family moved to Cleveland, Ohio, when Allport was six years old, and he was raised in the same home out of which his father practiced medicine. The less than adequate hospital facilities in Cleveland required that Allport’s father allow doctors, nurses, and patients to reside in the home with the family. During his childhood, Allport and his siblings were immersed in the medical profession and often acted as clinical assistants to their father. Allport later acknowledged that this experience became an integral part of his early education.

Allport’s mother was an educator, and she instilled in all of her children the importance of education and strong work ethics. Allport was a shy child and was often ridiculed for his physical impairment of having been born with only eight toes. During his high school years, Allport founded a printing business and held the position of editor for his high school paper. He graduated from Glenville High School and secured a full scholarship to Harvard, following in his brother’s footsteps. Allport diverged from his brother’s pursuit of psychology, earning a bachelor's degree in economics and philosophy instead. While at Harvard, Allport exhibited his social interests by volunteering in various capacities, including as a probation officer, assisting foreign students, helping war veterans, and participating in a Boston boy’s club. As Allport continued his education at Harvard, he eventually turned to psychology and went on to earn his PhD.

After his graduation from college, he spent some time in Europe and had the opportunity to meet Sigmund Freud while in Vienna. In an autobiographical piece, Pattern and Growth in Personality, he relays the story of the meeting, explaining that he told Freud of a boy he met on the train. The boy appeared afraid of dirt, even when his mother tried to reassure him. Allport speculated that perhaps the boy had learned this phobia from his mother, who seemed to be highly domineering. According to Allport, Freud responded to the story by stating, “And was that little boy you?” Allport felt that Freud’s response was highly dismissive of his current feelings and motivations. He also believed that the tendency of psychodynamic psychology to examine people’s unconscious motives and their past could lead to overlooking present issues.

Allport began his instruction in psychology at Harvard. He taught “Personality: It’s Psychological and Social Aspects,” which was a study derived from the research he had previously conducted with his brother. Allport also spent a brief period of time teaching at Dartmouth College, though he soon returned to Harvard where he taught until his death in 1967. During his tenure at Harvard, Allport sat on many committees and facilitated groundbreaking courses. He acted as editor, faculty member, and fellow, and in 1939, he was chosen to be president of the American Psychological Association.

During the next several years, Allport was an active member of several societies and published several books. In 1955, his fifth publication was released, Becoming: Basic Considerations for Psychology of Personality. This book became one of his best known works. Allport eventually went on to achieve several awards and accolades, including the Gold Medal Award given by the American Psychological Foundation and the American Psychological Association’s coveted Distinguished Scientific Contribution Award.

Unlike many other psychologists of his time, Allport placed a strong emphasis on conscious motivations and thoughts, and this led to a strong interest in the development of personality. Although Allport is noted as being influential in many areas of psychology, he is particularly well known for his trait theory. Allport determined that every human being possesses hundreds of traits that exist on one of three levels:

Allport also identified the existence of what he termed genotypes and phenotypes—internal and external conditions that motivate a person’s behavior. He continued to develop the field of personality psychology while examining the nature of a person’s will, motivation, and determination. He distinguished between drive and motive and explored the conditions that support and affect each. Allport attempted to draw a clear distinction between motives and drives. For him, a drive is more akin to an unconscious behavior. For example, a woman might initially have a strong need to make friends because of early childhood abandonment or feelings of inadequacy. But an independent motive can develop out of this drive, and the same woman might nurture her friendships because of her concern for her friends, or because she enjoys doing activities with them. Allport was adamant that people are autonomous beings with free will; they're not solely driven by instincts and drives, and not just governed by the past. He emphasized the primacy of learning and argued that current behavior and thoughts are the product of an entire life history—including the present—rather than just some brief period in early development. 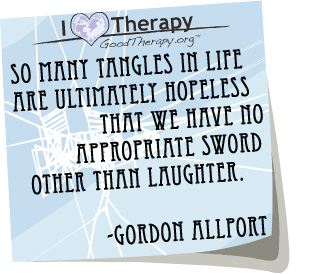