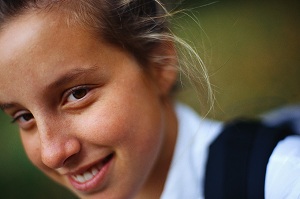 “Shy is the most terrible feeling that you can get.”

“Shyness is a habit that began when someone was afraid to talk and didn’t know what to do. Sometimes shyness can make us seem boring.”

“If I say the wrong thing, I shy to say something again.”

“I am shy because I’m afraid that people will laugh at me. If someone laughs at me, I will feel afraid, shy and I think I did something wrong.” (Other fears are “teasing and whispering.)

“I want to be less shy because I don’t want always to be a shy girl, and I want to be a good, smart, and brave girl.”

These words come from the students in my sixth grade English-as-a-second-language classroom in Central Kalimantan, Indonesia. We were talking about “shy” because all of them worry about being laughed at or being wrong or not good enough. One student covers his mouth when he can’t think of what to say or is too shy to say it. Another student speaks so softly that I we have to read her lips to understand. Over the semester the things that seem to help the most are: “Would you like us to come back to you?” “Would you like a little help?” “Maybe you could write it for me,” saying in a playful, singsong voice, “Just a little bit louder and a little bit slower.” Sometimes I say, “Did you understand?” If the others shake their heads, I ask, “Would you like to?” When they nod yes, I say, “So could you say it again, please?”

Still, after some months their shyness was still interfering with speaking and learning. I knew that what they were thinking and feeling was so much greater than what they could say aloud. As the above sentences show, their writing was more revealing than their words. However, one of our major class goals is to increase confidence and fluency in speaking English.

One day, the other sixth grade teacher unexpectedly had to leave, so class expanded to 12 students. We began with the “yes, and” game in which one person begins a story and then turns to the student next to him who says, “yes, and” and then continues the story. When a student was shy and couldn’t think what to say, the other students laughed. It seemed like “release of anxiety laugh” rather than a mean laugh, but it was laughter—just what these students are most afraid of. We finished the first round of the story.

“So, some of you felt shy.” (Heads nod.) “In class Six A, we have talked about when you are shy you are most afraid of being laughed at, right?” (Heads nod again.) “So how many of you felt shy?” (Most hands go up.) “How many of you are afraid of being laughed at?” (Most hands.) “How many of you laughed?” (Most hands.) “What kind of laughter was it?” “Just teasing, not mean,” answered one student as the others nodded. “So, let’s try an experiment. In the next story, let’s make an agreement that no one will laugh. Okay?” To my amazement, during the next round of a new story, some of the students were slow, but all spoke, we heard all of them, and no one laughed. (Two students did begin to laugh out of habit but caught themselves and stopped.) “So, what did you notice?” “We didn’t laugh.” “Right.” “What else did you notice?” “We hear everyone.” “Yes. So, it seems that when you are not afraid of being laughed at, you don’t feel and act so shy.” They nod.

In our next class, we talked some more. “What are you imagining that the others are thinking when they are laughing at you?” “You’re not good enough. You’re a fool. You’re bad.” “No wonder you don’t want to talk,” I said. “How scary. So, when you’re laughing, what are you thinking?” “Not mean things, Bu.” One brave student said, “I’m laughing because I’m glad it’s not me.” Another said, “I’m laughing to be friendly because the silence feels bad.” Another brave student: “Sometimes I am thinking they are not smart, but even if I’m thinking that, I don’t have to laugh.”

“So, let’s make a picture of this. Action 1: You are feeling shy and are having a hard time speaking. Step 2: Others laugh. Step 3: You think they are thinking one of these things:

Interestingly, in Indonesian, the word shy (malu) is also a word for shame. And, indeed, shy and shame feel like cousins to me. Cousins with a big difference. Shy is a normal feeling and results in behavior that can be changed. Shame is an intense and irreparable feeling of core inadequacy, badness, or unworthiness; one is forever doomed. The impact of shame is secrecy, disconnection, and an inability to assess reality. Shame: I AM not good enough. I AM unlikeable. I AM a fool. I AM a mistake. Shy: I don’t feel good enough. I feel disliked. I feel like a fool. I made a mistake.

I explained this difference to the students and we talked about how most of the time they are making up what the others are thinking and it is not at all true. “Oh, I understand. Yes, I’m making it up.” We translated the shame ideas to shy ideas. I AM not a good enough person became I’m feeling not good enough right now. I AM bad became I’m feeling bad right now. I AM a fool became I’m feeling foolish. They hate me became sometimes I don’t feel like people like me. I AM wrong became I made a mistake. They tried out feeling what the difference was between the sentences on each side of the big sheet of paper. Then I whispered in each student’s ear: “You’re good enough even when you feel shy.” Each one shyly smiled.

Back to writing. “Please write about shy again.”

“I’m not shy when I really know about the other person.”

“If I get shy or say the wrong thing, I want my friends are not laughing at me, but they can help me.”

“Stop caring too much about what the other people thinks about you.”

“The best way to not be shy is to be brave and try to do that thing even if you are shy.”

“I’m not shy when someone make me confident.”

“When I’m not shy, I feel like a hero because I’m brave.”

This was a heroic topic for this group of students to explore. During the next week, we tried a few things that I found on the internet to help with shyness. For example, appreciating yourself, breathing from your belly, moving your body, imagining yourself as confident and happy, getting more comfortable with making mistakes, remembering that everyone feels shy sometimes, noticing and writing down your successes.

Now, at the end of the semester, all the students except one, by their own assessment, feel more fluent and confident speaking in English. All of them still are slow to speak in English sometimes. They’re still afraid of not doing well enough sometimes. But they know the difference between, “I don’t feel good enough right now and I’M NOT GOOD ENOUGH and the difference between, “I made a mistake, and I AM A MISTAKE.”

Shame, the cousin of shyness, is a right use of power issue because the feeling is so intense and feels so irreparable that it disconnects people from relationships, disempowers them, and removes their ability to assess reality. When activated by shame, people are out of relationship with others. When out of relationship with others, and unable to assess reality, people misuse their personal and positional power in ways that harm themselves or those around them or in their care. Understanding the dynamic of shame and helping yourself and others disengage from it are high priorities for using power wisely and well.

Related articles:
Shame as an Ethics Issue – Part III
Don’t Underestimate Me: Ethical Use of Power for and With Children
Excessive Impression Management and Interference With Identity