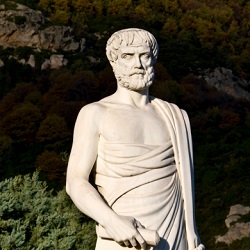 Philosophy—the love of wisdom—is an academic discipline dedicated to the study of knowledge and is one of the oldest academic pursuits, dating back thousands of years. Many disciplines that we now recognize as distinct from philosophy—including biology, psychology, physics, math, and numerous others—were once studied by philosophers. Aristotle, for example, is recognized as a founder of biology, and authored several volumes on taxonomy and animal biology.

The precise definition of philosophy is an ongoing subject of philosophical debate. Because philosophy concerns itself with broad inquiries into life, being, and knowledge, it touches almost every academic discipline. As a result, many topics that philosophy focuses on eventually become specialized disciplines, distinct from philosophy. For example, Sir Isaac Newton’s Mathematical Principles of Natural Philosophy presented many of the physical laws we still use today, and it was originally intended as a work of philosophy. The book helped spur the creation of physics, though, and physics is now generally recognized as an area of knowledge that is separate from philosophy.

Some philosophers have argued that all knowledge is classified as philosophy in its early stages and that as the knowledge becomes specialized, it gains its own discipline. Given this ongoing segmentation of knowledge, it’s not surprising that even philosophers are unable to agree on what philosophy is or should do.

Various philosophers have suggested several roles for philosophy, including:

Philosophy is a dynamic, evolving discipline, which means that every generation defines what does and does not constitute philosophy slightly differently. Very broadly speaking, philosophy can be divided into the following sub-disciplines:

There are many other pursuits within the field of philosophy, including philosophy of law, philosophy of religion, and linguistic philosophy. Many of these domains of knowledge cut across the borders of several disciplines in philosophy.

In the early days of psychology, many philosophers contributed to the field, and many psychologists made philosophical claims. These interdisciplinary experts include Sigmund Freud, William James, Aristotle, Friedrich Nietzsche, and Arthur Schopenhauer.

Philosophy also plays a key role in defining and deepening psychological questions. Philosophy of science, for example, dedicates itself to determining what counts as scientific knowledge, what evidence is sufficient to prove a hypothesis, and how we can really know anything. This has direct bearing on psychological experiments and claims.

Psychology and the Philosophy of Mind

The most central problem in philosophy of mind is the mind-body problem. Originally presented by Rene Descartes, the mind-body problem attempts to find the connection between mental states and biological processes. Contemporary scientists believe that subjective experience originates in the brain, but have not yet fully accounted for how a physical entity such as the brain can give rise to subjective experiences and consciousness. Raymond Tallis, a philosopher and neuroscientist, has published several books on this very issue.