The Scaffolding Map in Narrative Therapy: Case Study with Peter 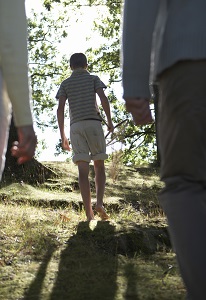 I had the recent pleasure of meeting an 11-year-old boy who came to my private practice. Peter’s father referred his son to me because the boy had shown signs of melancholy and anger.

Peter’s father had already shared with me that, for a number of years, their family had been exposed to extreme domestic violence in the home. The offender of this violence had been removed from the home six months prior. Though most the family (Peter’s dad and his three siblings) had been adjusting well, Peter showed more emotional symptoms than his siblings and his father wanted to give him more support through counseling. His dad lamented the seeming loss of Peter’s carefree nature from his earlier childhood.

When I first met with Peter, I included his father in the entire session. Peter wanted this, too. With Peter’s permission, his father expressed his worries about his son directly to me so that Peter could hear these thoughts from a distance. I checked in with Peter periodically while his father talked, to ensure that he was okay with what was said. By doing this, I kept Peter at the center of the conversation, and gave him the power to decide whether or not his father’s version of his story was accurate and acceptable.

Through externalizing questions (using Michael White’s Externalizing map) with both Peter and his father, we all identified that Peter was indeed angry, and felt responsible for avoiding arguments in the home, between and among siblings. By experiencing this responsibility, Peter identified that he often felt stressed and on edge.

Even with the use of externalizing language, and Peter’s expressed willingness and desire to participate in counseling, he had a difficult time holding back tears as we discussed the effects of anger and responsibility. I knew from his father that Peter would show this sensitivity and ease of crying at home, and I wanted to spare him any further internalized negative experience. Also, because Peter had identified already that he liked peace in his home, I aborted my use of the externalizing conversation, and instead explored Peter’s initiatives that ran counter to his experience of the problem (using Michael White’s scaffolding conversation).

I explored with Peter his interest in having a calm household. He told me that he felt more comfortable and less stressed when things were calm. His father had earlier expressed a concern that Peter seemed always ready to anticipate problems and tried to stop them, preventing him from relaxing and acting carefree. While this is a legitimate concern from his dad (and one that Peter concurred was problematic), I didn’t want this ability of Peter’s to be overlooked as a detriment, but as a particular skill that developed because of a stressful and violent living situation.

I focused more globally on what kinds of ways Peter could keep his household calm. He spoke of trying to stop arguments by saying, “Stop it” to his siblings, how he loved to read, finding books calm-producing, and he mentioned his hyperawareness of his environment. Through this inquiry, Peter was able to say that his skill of seeking calm in the household had dual effects: he liked that it was less stressful when things were calm, but he also agreed that sometimes his calm prevented him from being carefree. In concluding our conversation, he expressed that he would like to work toward ways of letting his carefree nature return.

Most noteworthy was the change in Peter’s body language as I changed my method of inquiry. Once I switched to the scaffolding map, Peter was able to separate himself from his tears and the shame and the sadness that accompanied my initial attempts to externalize the problem. As soon as I began talking about Peter as being skilled, he stopped crying, sat and spoke up, and focused on the conversation. We spent little time exploring the problem at hand, which in this case was warranted. Peter had already told me that having calm was important to him. He provided me with a description of his unique response to the stress and violence in the household. I didn’t have to look for it. I simply explored with him.

By the end of our conversation, I began to experience Peter as a much more engaged and focused 11-year-old. His speaking was more animated and he smiled more. He said he would like to come back and talk more about ways to become more carefree. His father shared some of the times he has experienced Peter acting more carefree. Both father and son appeared happy and relaxed.