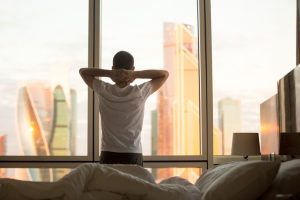 No matter how comfortable you may be with your sexuality, the idea of sex therapy can be intimidating. Many of the people I work with in sex therapy struggle with sexual functioning or desire, issues that often come loaded with complicated emotions such as anxiety. These things can be difficult to talk about, let alone try to do something about—even when it is understood that the person you’ve enlisted to help you is a compassionate and nonjudgmental professional.

For men in particular, socialization related to sexuality can add to these complexities. Although not uncommon, the experiences of premature ejaculation or erectile dysfunction can bring deep feelings of shame—even in committed relationships with partners who are understanding and patient. Many men are socialized to believe sex should be easily enjoyable and they should always be in control. When it doesn’t work out this way, some may feel intensely inadequate or weak. Men in these situations may question their worth as partners and even as human beings. If a partner isn’t understanding or patient, these feelings can be amplified.

As a sex therapist, I am trained in specific techniques that men can utilize to resolve a variety of sexual concerns. However, these techniques are often insufficient in addressing premature ejaculation and erectile dysfunction. Given the complexity of these issues, holistic sex therapy can play an important role.

It’s natural to seek out strategies that focus on physical functioning—the most obvious symptoms of sexual issues—but sex is more complicated than that. There are thoughts, narratives, emotions, and processes associated with the act of sex. These elements can greatly affect desire and pleasure. They can also impact bodily control and responses.

Sensory issues must also be addressed. The body tells its own story. Sometimes this story matches up well with the mind’s story about a problem, other times not so much. In these situations, people can benefit from learning about the activation cycles of their bodies—knowledge they can then incorporate into their sex lives.

It’s natural to seek out strategies that focus on physical functioning—the most obvious symptoms of sexual issues—but sex is more complicated than that. There are thoughts, narratives, emotions, and processes associated with the act of sex.

Holistic sex therapy is also about identifying cultural and social narratives surrounding sex. Not only can this exploration help people understand some of the roots of what they experience, it can also help them learn about ways their sexuality has been impacted, and how their bodies respond to these ingrained stories. Through sharing and understanding, validation can lead to healing and growth. It can also lead to sexual confidence that reflects acceptance of these influences while also challenging them.

Religion and spirituality can also play a role. These two elements can be related, of course, but they can also be very different. In fact, they can even contradict each other. Certain forces of religion, when deeply embedded, can overtake a person’s ability to sexually express themselves. Meanwhile, spiritual meaning can be difficult to ascertain.

In holistic sex therapy, self-esteem work is also relevant. When people recognize the barriers that are leading to their sexual issues, they may have to rediscover what they value about themselves.

Sound like a lot? Well, that’s because it can be. Sex can be complex, especially when you delve beyond the presenting physical issues and explore emotions and cultural influences. It’s rarely just one thing. Although many people tend to think of sex as primarily a physical act, there’s a lot more to it. Therapy that doesn’t explore these often hidden aspects does a disservice to the people who seek it.