How Emotional Intelligence Can Be Key to Workplace Success 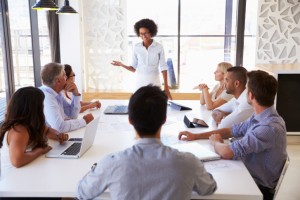 While there are many benefits to having high intelligence, many managers, supervisors, and other workers—particularly those who work in businesses in which interpersonal relationships are key—have become keenly aware that workplace success may depend on their ability to use another invaluable personality trait: emotional intelligence.

What Is Emotional Intelligence?

The concept of emotional intelligence (EQ) was introduced by psychologists Peter Salovey and John Mayer in a landmark article in 1990. The idea was popularized in 1995 by psychologist and author Daniel Goleman after the release of his book, Emotional Intelligence: Why It Can Matter More than IQ.

Emotional intelligence refers to the capacity to identify, evaluate, and manage emotions in one’s self as well as in other people. While some researchers believe this ability may be trained and developed, other experts suggest emotional intelligence is a trait a person must be born with.

Though each model has its distinguishing features, the underlying principles of the models are similar. According to Goleman, the key principles of emotional intelligence include:

Emotional Intelligence in the Workplace

Many mental health experts believe emotional intelligence is a valuable asset in the workplace. In certain environments, employees with high levels of emotional intelligence may be better able to cooperate with others, manage work-related stress, solve conflicts within workplace relationships, and learn from previous interpersonal mistakes.

This may not mean high emotional intelligence is beneficial or necessary for all jobs. Studies show that while jobs that require large amounts of interpersonal interaction—for example, sales or real estate jobs—may benefit from workers who possess high emotional intelligence, the opposite is true for occupations that are generally more individualistic, such as a research scientist or an accountant.

In settings where people tend to work alone, people who possess high emotional intelligence may actually perform at a lower level than the average worker because they may be overly concerned about the emotions of other people.

In certain environments, employees with high emotional intelligence may be better able to cooperate with others, manage work-related stress, solve conflicts that may arise within workplace relationships, and learn from previous interpersonal mistakes.Though emotional intelligence may not be necessary for every type of job, it can be a vital trait for most people in leadership positions. To be effective leaders in the workplace, managers, supervisors, and other authority figures must be able to function productively with people under their charge. A good leader is able to create the type of work environment where each person feels relevant and motivated to succeed.

Leaders with high emotional intelligence are able to use their social skills to foster rapport and trust with their employees. They tend to view their team members as individuals with unique abilities, backgrounds, and personalities, rather than as a uniform collective. Effective leaders seek to understand and connect emotionally with their staff—genuinely sharing in their joys as well as their concerns. The ability to build mutual trust and respect can become especially important if an unpopular decision is made within the business setting, but the managers need to keep their teams working efficiently.

Like all other types of relationships, work relationships may experience problems sooner or later. When conflict arises, leaders with high emotional intelligence may be better able to control their own impulses, view the situation from all perspectives, and seek mutually beneficial solutions. Effective leaders are transparent and are not afraid to admit when they are wrong. They are also more likely to try to improve work relationships.

Despite these issues, however, some experts believe emotional intelligence may be trained and developed.

The Potential Downsides of Emotional Intelligence

Though emotional intelligence is usually painted in a positive light and is often considered to be a valuable personality trait, a balanced view of the concept can be important. Emotional intelligence, like any other skill or talent, may be used positively or negatively depending on the intentions of the person wielding the ability.

As people with high EQ are better able to manage their own emotions and evaluate the emotions of others, they have the capacity to be more deceptive and manipulative than other people. Business leaders with high EQ and self-serving motives may toy with the emotions of their employees, using them to climb the corporate ladder with little regard for their workers’ long-term welfare.

Such leaders may also pretend to offer friendship and support, while secretly seeking to undermine the ambitions of team members who could become potential rivals. They may even expose their workers to public embarrassment, shame, or guilt in an effort to reach their own personal goals.

Those seeking to become effective leaders may do well to reflect on the importance of emotional intelligence. Leaders who are eager to hone specific aspects of their emotional intelligence may utilize self-help publications or seek the support of a qualified counselor, therapist, or coach.