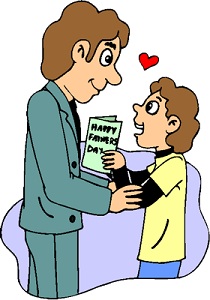 My husband was surprised the first time he got a Father’s Day card from our kids. Not having any kids of his own, his assumed role of step-father was one he was utterly unfamiliar with. He had been raised by his mother and has never known his father. Perhaps that is why that the whole concept of celebrating Father’s Day was foreign to him. When he first saw the cards lying on the table, he did not realize they were for him. After a few moments, it sunk in and a look of confusion and trepidation came over him. After graciously accepting them from the kids, and thanking them profusely, he shared with me his true feelings.

He was uncomfortable at first, being recognized as a dad. He had no frame of reference for this title, and felt very awkward accepting gifts that he did not feel he deserved. My husband saw himself as an active parent in my children’s lives. But he shared that role, and does to this day, with their biological father. Their “real dad” is very present in their lives and sees them weekly. He speaks to them almost every day and is pretty up to speed on the events that transpire in their worlds. But my husband, their “other dad,” is the one who interacts with them daily. He is the one who bathes them, shops for them, tucks them in, attends their events and listens to their problems. So as each year passes, I wonder how sharing that title sits with each of the dads.

When there are two dads, how do the parents, and the children, reconcile their feelings of allegiance and affection? Even if a biological father is not present, but maintains a long-distance relationship, does he feel less loved if the children merely call him, rather than spending time with him on Father’s Day? If the kids go gangbusters for the Disney Dad that only sees them occasionally, and play down the festivities for everyday dad, how does that make the step-father feel? If the mother pushes the children to acknowledge a step-father as just as valid as their real father, do the children feel guilt? Are they emotionally torn hoping that neither father finds out about their gifts for the other? Or vice versa, if the children ignore their biological father in favor of their step-father, does this set the stage for future animosities, between children and parents, or worse yet, between the fathers?

Fortunately, both of the fathers in my children’s lives are mature, loving parents. But that is not always the case. Too often there is significant resentment toward one father, whether from the children, the mother, or the other father. The relationship between a father and his kids is unique. It is different than the usually nurturing, tender relationship a child has with his mother. And when the father is distant, forging that bond between father and child becomes more difficult. Because men are less likely to vocalize their feelings than women, many dads watch this holiday come and go with little commotion and never mention how that affects them.

If a father is deeply emotional about lack of attention on Father’s Day, it may be because he longs for a different relationship with his children. If a father has a healthy relationship with his children, and interacts with them regularly, chances are that being acknowledged more or less than other father figures will not be that big a deal. But if the attention he receives, or doesn’t receive, stirs something inside him, maybe he should look a little closer at just what role he is playing in his children’s lives.

In our house, I let the kids pick the gifts and cards they want for each of their dads. There is never discussion about who gets more or who to spend the most on. As my children have gotten older, they have chosen gifts that celebrate the unique relationship they have with each of the fathers. And to this day, whether it is a macaroni necklace or a new watch, not one of the dads has complained.