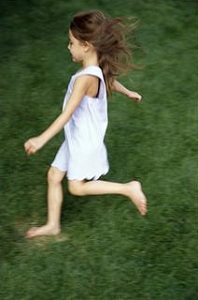 One of the most difficult parts of raising a child with autism is the fear of losing them. For my son, the combination of intelligence, impulsivity, and an inability to comprehend danger results in my family living in a constant state of hypervigilance and fear. When we go out, there is always the possibility he will try to run away. When we’re home, there is the fear that he will get out of the house. Our family has addressed this issue with an ability to think “outside the box” and one step ahead of our 14-year-old son, Ben.

1. Under lock and key
The most obvious way to keep a child safe at home are locked doors. We learned the hard way that deadbolt locks with a switch that can be turned by hand was only effective until he was 6 years old. One day he unlocked it and wandered out of the house while I was only one room away. Luckily, I caught him in time before he was halfway down the street. We switched to locks with keys and installed them on every door leading to the outside, my laundry room, my daughter’s bedroom, and our master bedroom. They are all master keyed so that our house key opens them all. In addition, we don’t keep our keys hanging next to the door. It’s inconvenient, but that’s the point.

2. Keeping watch: tag, you’re it
Another safety trick we use at home is something I learned from a life guard. While attending a beach outing for kids with special needs, they handed out lanyards with laminated cards that said “I’m Watching” on one side and had emergency first aid information on the other. This was to ensure that when there is a group of adults hanging out watching their kids play in the water, the parent wearing the lanyard is responsible for watching the child. This made me think about our own situation at home, where too often, my husband thought I was watching Ben while I assumed he was. This situation leads not only to missing kids but also to marital strife. So, we put the keys to the house on a lanyard, and the designated Ben-watcher wears it at all times. This way, when one of us needs to use the bathroom, we literally hand off the lanyard to the other person.

3. Tracking devices, helicopters and bloodhounds, oh my!
One of the most frustrating things about staying one step ahead is that we often don’t think about something until it presents itself as an obvious problem. Even after we changed the locks and donned our key lanyard, Ben’s safety was still not guaranteed. Last year, our greatest fear became a reality when Ben climbed our 6-foot privacy fence with the speed and dexterity of a tomcat. The person watching him was only a few yards away and watched him do it but could not reach him fast enough. He disappeared into the woods for 3 hours and was found with the aid of search helicopters and bloodhounds just before the sun set; he was cold, wet, and shivering.
After that incident, we obtained a tracking bracelet from our local county sheriff’s department that Ben wears on his ankle at all times. In the event that he ever goes missing, we can contact the police, who will find him using the radio signal from the device, rather than alerting the local news and calling the search cavalry. And from what they tell me, as long as the device is checked regularly and in working order, it doesn’t take 3 hours to find someone with this device.

4. Out and about
Parents of children with autism spectrum disorder know how difficult it can often be to take our children out into the world. A simple trip to the grocery store can become disastrous in no time flat. When our kids get overstimulated or can’t communicate, tantrums ensue and we often have to make a quick exit, while not making eye contact with fellow shoppers and store employees. Ben’s Houdini-like skills have also extended outside the home; school, stores, and Grandma’s house have all been settings for a “Ben Escape.” One thing we do now when going out is use a wheelchair with a seatbelt. Because of Ben’s sensory issues and difficulty transitioning, the wheelchair provides a secure, safe place for him to sit as well as the emotional stability of his seat remaining the same while his environment changes. Portable door alarms have been helpful on the rare occasion that we stay at a hotel. We’ve even been known to stack some of the hotel furniture in front of the door, from floor to ceiling, providing a barricade that would make a lot of noise if he tried to get past it. We’ve done the math, and we’re statistically more likely to lose our son than to have to evacuate in a hotel fire.

5. Vaseline
Yes, you read that right; Vaseline. Good old petroleum jelly became my best friend after Ben’s 3-hour tour of the woods. I needed a way to keep fence-hopping to a minimum, and apparently barbed wire is frowned upon by our home owners association. So, several jars and a very icky fence top later, the problem was solved. If having an autistic child in the drug-store line doesn’t solicit enough curious glances from fellow shoppers, nine extra-large jars of Vaseline is sure to.

For more information about wandering and a free box of safety materials, contact the National Autism Association at http://nationalautismassociation.org/big-red-safety-box/

Related articles:
The Difference 1 Makes: Reflections on the CDC Autism Rates
Autism on the Rise: Are We Prepared?