Born in Vienna, Austria, to Hungarian parents, Alfred Adler was the third child and the second son in a family of seven children. He was a frail boy, developing rickets during his early years, before being struck by a near-fatal bout of pneumonia at age 5. These serious health conditions, coupled with his rivalry with his older brother, led to feelings of inferiority throughout his childhood. Adler believed that these early life experiences were the major factors which drove him to become an excellent physician. He went on to attend the University of Vienna Medical School and received his degree in 1895. Adler began his foray into the medical profession in the field of ophthalmology.

Adler and his wife fled Austria in 1932, after the rise of Hitler, and moved to New York where they remained until his death in 1937. Adler’s influence is still evident in the many branches of psychology that reflect his theories. Adlerian psychology maintains that regardless of their childhood experiences, people possess the power to transform their lives, their mental health, and their overall well-being.

Alongside Sigmund Freud and Carl Jung, Adler helped to pioneer depth psychology, which emphasizes the importance of unconscious processes. He is widely considered to be one of the most important figures in psychology.

Adler's relationship with the renowned psychiatrist Sigmund Freud began in 1902, when he was invited to join what would later become the Vienna Psychoanalytic Society. Though often referred to as a disciple of Freud, Adler was, in fact, a very strong-willed colleague—agreeing with Freud on some issues and disagreeing with him on others. Although his influence in the society was impactful, Adler’s views on sociology and psychology differed radically from Freud’s, and by 1911, the men’s differences in approach and opinion were irreconcilable. While Freud castigated Adler for his emphasis on conscious processes, Adler denounced Freud for his overemphasis on sexuality. Soon, intense social pressure from Freud’s most loyal followers resulted in Adler’s resignation as the president of the Vienna Psychoanalytic Society and the editor of the society’s journal.

Adler developed his own approach and his School of Individual Psychology was established in 1912 and was based on the belief that people’s relationships to their society were an integral part of their individuality. The foundation of Adler’s theory revolved around a person’s pursuit of superiority. Adler believed that each person entered the world with a definitive inferiority complex and spent a lifetime trying to overcome it. This theory became known as “striving for superiority,” and Adler’s school focused on exploring this motivating force in the development of human behavior.

Although the growth of individual psychology was somewhat hindered by Adler's military service in World War I, his work did result in achieving worldwide recognition during his lifetime. Today, his theory and methods are widely applied in the fields of education, parenting, psychotherapy, and counseling.

Adlerian psychology, as it is known today, continues to pursue the study of overcompensation due to inferiority. A central premise of Adlerian psychology is that the unconscious works to convert feelings of inferiority into feelings of superiority. Adler’s model suggests that behaviors, thoughts, and processing mechanisms are well entrenched in a person by the age of five and that the relationships the child forms in early life, along with social and environmental forces, are directly responsible for the development of those traits. He also conducted research into the role that birth order plays in the development of the psyche.

Adler was one of the first psychiatrists to introduce mental health into the realm of education. He advocated for prevention strategies designed to ward off the risks of mental illness and inappropriate coping skills, and in this regard, contributed greatly to the field of social work.

Working within the schools, Adler assisted professionals in the practice of treating and counseling students. During that time, Adler conducted an intimate therapy session in front of a small group of people that was designed to treat parents, children, and teachers. This impromptu session is one of the earliest records of family or community therapy. Adler went on to change the face of psychology by innovating the use of therapy in the treatment of many sectors of the population that had been significantly underserved. His methods became an integral part of criminal therapy, social work, child development, and education.

Adler combined theories of psychodynamics and teleology in his work. Teleology is the study of final causes and the ways in which things are designed toward these causes. As part of this belief, he emphasized that psychological processes are guided by an unknown, goal-oriented force.

The first three types tend to have more mental health problems, and it could be argued that a central goal of Adlerian psychology is to convert the first three types into the socially useful type. Adler strongly influenced later psychologists such as Abraham Maslow, Carl Rogers, Erich Fromm, and Albert Ellis. 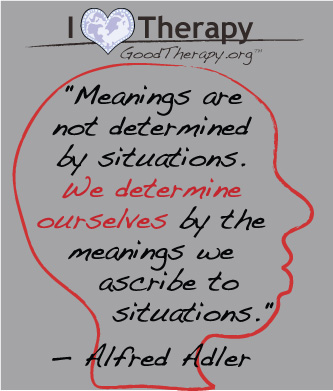