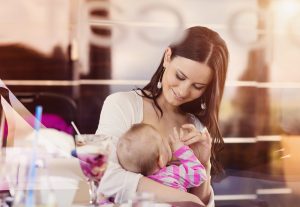 Breastfeeding may improve brain development, boost IQ, and sharpen memory in preterm infants, according to a new study published in The Journal of Pediatrics.

August 1-7 is World Breastfeeding Week, with organizations such as the United Nations Children’s Fund (UNICEF), The World Health Organization (WHO), and International Baby Food Action Network (IBFAN) drawing attention to the many ways breastfeeding can improve physical and mental health.

For the study, researchers observed 180 babies born before 30 weeks gestation until they were 7. Babies who received more breast milk during their first 28 days of life had better cognitive and mental health outcomes. Their Intelligence Quotients (IQ) were higher and they had better working language and memory, stronger motor skills, and higher academic achievement.

Magnetic resonance imaging (MRI) scans revealed greater volume in regions associated with some cognitive functions in the brains of babies who received at least 50% breast milk during the first 28 days of life. Breast milk was linked to larger deep nuclear gray matter, which is believed to play a role in transmitting signals throughout the brain.

Although the study’s authors adjusted for many factors that might affect outcomes, such as maternal education, they could not account for all potential factors. For example, mothers who breastfed their babies might also have been more heavily involved in other components of daily care, producing better outcomes.

The researchers point out that it is common for many mothers of premature babies to have difficulty breastfeeding, and they believe doctors and hospitals must do more to support mothers in their breastfeeding goals.

Breastfeeding Can Be Key to Infant Survival

In impoverished regions, breastfeeding may be one of the only safe forms of nutrition for babies and young children. According to a new UNICEF report, it is recommended for babies to be breastfed within the first hour of life. The report claims this could reduce deaths within the first 28 days of life by as much as 40%. If all babies were exclusively fed breast milk for the first six months of life, approximately 800,000 lives could be saved each year, according to a press release from UNICEF.

Data from UNICEF show progress toward higher worldwide breastfeeding rates has been slow, and many women do not get the support they need to initiate and continue breastfeeding. In some countries, babies are routinely given alternatives to breast milk, such as cow’s milk or sugar water, potentially delaying breastfeeding. When breastfeeding is not possible, formula is often a more nutritious alternative than other types of milk.

Best for Babes, a breastfeeding advocacy organization, argues that nursing mothers often face judgment for breastfeeding, inadequate access to accurate information about nursing, and discrimination at work. At some hospitals, newborns may receive supplementation with formula without medical reason, which could make mothers believe breast milk is inferior or inadequate.

The American Academy of Pediatrics (AAP) recommends exclusive breastfeeding for the first six months of life, encouraging mothers to continue breastfeeding after the introduction of solid foods until at least 12 months. The organization also urges pediatricians to provide mothers with the support they need to breastfeed as long as it is mutually beneficial for both the mother and the child.