Words Matter: How Language Affects How You Relate, Part 2 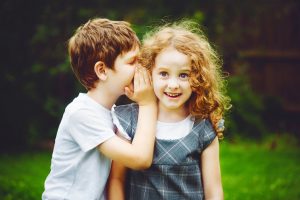 At a fundamental level, speaking and language have an immense impact on how we relate to others. In a previous article, I discussed the power of words, highlighting in particular the materiality and structuring power of language. Within these constructs, I presented words as both substantial (i.e., able to make a mark) and framing (making what we say and how we say it imminently important). In this article, I want to delve deeper by looking at the ability of language to bring new experiential worlds into existence.

In order to examine what this means, I must briefly return to the structuring power of language. As mentioned in my previous article, language has the power to create a framework through which relational interactions are viewed or interpreted, but this quality of language is even more expansive and pervasive than how someone starts a conversation.

In his pioneering work on childhood development, Jean Piaget (1970) developed some of the precursors to what would become known as structuralism. While there are tenets of structuralism that run throughout many academic fields, the most important to this discussion is that humans organize or make meaning of their experience. By this, I do not necessarily mean having a “sense of purpose” in the abstract sense; rather, it seems to be an invariant of being human that individuals, from an early point in childhood, begin structuring their experiences of the world around them to form what we may colloquially call a “personality.”

Piaget (1970) suggested the complementary processes of “assimilation” and “accommodation,” through which incoming experiences may be understood, maintain this “personality.” During assimilation, what one experiences seems to fit with one’s internal world and is incorporated quite seamlessly. For example, imagine someone states, “You are bad at math.” If you already believe this, the felt impact of what was said may not be terribly disconcerting; however, if you considered yourself to be good at math and someone made the same statement, accommodation would occur if you adjusted or adapted your internal world to fit with this new experience or knowledge.

Interestingly, the experiences that require accommodation—that is, challenge the preexisting personality structure—are often the types of experiences that bring individuals to psychotherapy because they can generate unease or disturbance.

Accommodation, of course, can be quite difficult as it challenges one’s “personality” structure. Interestingly, the experiences that require accommodation—that is, challenge the preexisting personality structure—are often the types of experiences that bring individuals to psychotherapy because they can generate unease or disturbance.

When the process of accommodation takes places, there is a shift in the structure of one’s experience(s). In this way, a new and different way of experiencing comes into existence. The change may not have been earth-shattering (in other words, the whole of one’s value system does not change); however, as with getting your car washed after a few months, the experience of even a small change can have a strong felt impact (recall the materiality of language and its ability to be felt).

Allow me to provide a brief personal example in hopes of illuminating this concept. When I began my training as a psychotherapist approximately 10 years ago, I recall feeling terrified upon meeting with my first “real” (non-role-playing) client. I felt as if the person I was seeing might recognize my naiveté and peer right into my quivering heart. During a session soon after, I said something to this person that I felt to be quite confrontational. Upon reviewing this session with my supervisor, I hesitantly repeated what I had said and awaited my supervisor’s harsh judgment. Surprisingly, he said to me, “I think you could have taken (what you said) further.” I was shocked, and his statement opened up a new experiential world for me in the context of doing psychotherapy.

Language is powerfully impactful and can create a framework in which one may relate intentionally with others or oneself; however, while these aspects of language are important in their own regard, equally imperative to consider are their consequence—most notably, the ability to create new experiential worlds. In reflecting upon the gravity of language, it is my hope the words we give voice to are given the utmost consideration.