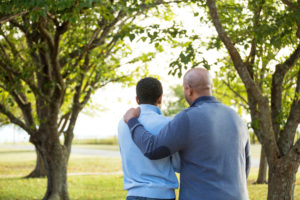 A few weeks ago, I had two people I work with in my private practice reference the Netflix original series 13 Reasons Why. This captivating miniseries, based on the 2007 teen fiction book of the same title by best-selling author Jay Asher, follows the story of Hannah Baker, a high school student who dies by suicide, leaving behind 13 audio recordings detailing the stories and reasons behind her tragic decision.

The first person who mentioned this series to me talked about offering support to a classmate who opened up about her own struggles after being triggered by the show’s mention of suicide. The other person who referenced the show talked about how deeply the series impacted him. We discussed how he identified with the “if only” and “I wish I would have” thoughts of another main character, Clay Jensen, the friend and crush Hannah left behind.

Recognizing it seems to be an emotional and thought-provoking peek into the life of many teens and young adults, I decided to watch the show myself and have since been hearing a lot of chatter regarding this controversial series.

The show has received criticism for “glorifying” suicide. Some are concerned it paints suicide as a viable and easy option for those with depression or facing the pain of bullying, or that it will result in copycat behaviors by teens starved for attention or looking for relief from their struggles. Apparently, several schools around the nation have sent letters to parents cautioning them against allowing their children to watch the show, and various mom groups have started campaigns to block the show from their homes.

Concerns regarding the romanticizing of suicide or the depiction of suicide as a viable option for coping with life’s struggles are valid; however, I believe this leap to fear misses the major point and objective of the show. Series writer Nic Sheff writes in Vanity Fair of the positive impact he believes 13 Reasons Why provides. He talks about the series “offering hope to young people, letting them know they are not alone—that somebody out there gets them” and states his position that “facing these issues head-on—talking about them, being open about them—will always be our best defense against losing another life.”

Fortunately, the life lost in this series is fictitious, yet the character of Hannah Baker sheds light on several important issues we all need to open our eyes to. Suicide, albeit a major theme of the show, is only one of the many difficult topics brought to the table. What the show does so well is highlight some of the major issues that contribute to the challenges teenagers—and others—are vulnerable to. Bullying, rumor spreading, sexual harassment, rape, trauma, homophobia, neglect, and drug/alcohol use are all major issues in our society and things that can quickly escalate to the point of significantly damaging or even destroying a life. Yet, people are often afraid to confront these topics.

For me, the biggest takeaway from the show is the realization we need to be thoughtful regarding how our words and actions may impact others. The show highlights how influential various relationships and interactions can be. Even seemingly minor incidents may be deeply scarring to somebody when it happens amid a host of other setbacks.

It is important for parents, teachers, school counselors, and therapists to be aware of this show’s existence and to open the doors to communication. When something provocative and controversial like 13 Reasons Why comes out, rather than panic or try to shield our kids from it, we need to seize the opportunity and use the material as a teaching moment, allowing us to begin conversations about topics that are otherwise difficult to initiate. Instead of trying to shelter our kids from these types of shows, movies, or novels, we need to recognize the topics depicted are things our kids likely already experience, or at least may be surrounded by in their schools, peer groups, and on social media. Shielding them from the show does not protect them from the struggles and potential harm that already exist in their world.

The show is out there and it’s not going away. If you have or know of a child or friend who may be interested in the show, especially those who are at risk for depression, self-injurious behaviors, or suicidal ideation, you might want to encourage them to watch the show with a parent or trusted mentor, rather than alone, so the material can be processed and discussed through productive and healthy dialogue.

For me, the biggest takeaway from the show is the realization we need to be thoughtful regarding how our words and actions may impact others. The show highlights how influential various relationships and interactions can be. Even seemingly minor incidents may be deeply scarring to somebody when it happens amid a host of other setbacks.

Further, we need to be cognizant that how we view or interpret the actions of others may not be accurate. We all have stories we tell ourselves regarding why things happen or why others do the things they do, and these stories may or may not line up to what’s true or real for that person. We never truly know what is going on in other people’s worlds, but we need to be aware that even the smallest of actions can have a major impact. Thus, it is important for us all to be more compassionate and understanding of one another.

Only in being kind and respectful, and in learning to effectively communicate, can we find healthy solutions to problems and positive ways to cope with the struggles we face. As Clay Jensen says in the final episode, “It has to get better. The way we treat each other and look out for each other—it has to get better somehow.” The way to make this happen is by talking—not shying away from difficult conversations or hiding from painful topics—and instead ensuring honesty and effective communication, along with compassion and kindness, are the lessons our children receive.

Sheff, N. (April 19, 2007). Thirteen Reasons Why writer: Why we didn’t shy away from Hannah’s suicide. Vanity Fair. Retrieved from http://www.vanityfair.com/hollywood/2017/04/13-reasons-why-suicide-controversy-nic-sheff-writer