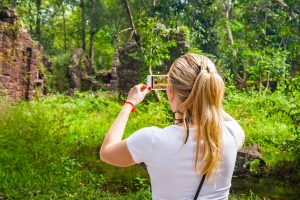 Almost as soon Pokémon GO was released, anecdotal reports from gamers claiming the game was helping to relieve symptoms of anxiety, depression, and other mental health concerns began to pop up all over social media. According to the various tweets and posts that have since been circulating in news stories, many users have discovered newfound motivation to get outside, exercise, and make some new friends.

Pokémon GO, an app that uses a smartphone’s GPS and camera to place the user in an augmented reality adventure, may help improve the symptoms of some mental health conditions, but the science behind why is not nearly as new as the game. Researchers have long known that many aspects of Pokémon GO—exercise, social interaction, spending time outside, and even the act of gaming—can help facilitate better mental health. Pokémon GO puts a new spin on these powerful self-care activities by making them fun and perhaps even generating a sense of nostalgia, but there are a number of reasons why this game might help improve mental health for some.

According to the American Psychological Association, exercise can drastically affect mood, and the mental health benefits of exercise are often more than short term. Researchers at Duke University, for example, gathered epidemiological data that found active people generally experience depression at lower rates than those who don’t exercise.

In addition to helping those experiencing depression, exercise may also be useful for not only treating symptoms of anxiety, but also preventing it. Researchers at the Anxiety Research and Treatment Program at Southern Methodist University suggest because exercise triggers many of the same physiological responses as the body’s fight or flight reaction, those who regularly exercise can build resilience toward panic and anxiety responses. A study performed at the university in 2008 showed that participants who experienced heightened anxiety saw significant improvement in symptoms after completing a two-week exercise program.

Available research appears to indicate Pokémon GO players might not only be reducing the severity of some symptoms of mental health conditions, but they may also be building future resilience if they’re hunting Pokémon regularly.

In the creature-hunting augmented reality of Pokémon GO, players drop lures to attract the wild Pokémon they’re trying to catch. This practice, in addition to visiting many points of interest created within the virtual world of the game, has caused some players to run into each other in the real world. These social interactions, centered around a shared interest of catching rare Pokémon, may be contributing to the anecdotal evidence that suggests playing the game can reduce symptoms of mental health conditions.

A study published in the Journal of Counseling Psychology found those who experience depression may be more sensitive to both positive and negative social interactions. Positive interactions, according to the study’s authors, contribute to an individual’s sense of belonging, which is something many who experience depression report having difficulty with. As a result, Pokémon GO players who might have avoided social interactions in the past due to a fear of rejection may now be discovering a newfound or renewed sense of community among fellow Pokémon hunters.

Therapeutic Value of Going Outside

Some Pokémon players have been tweeting and posting that the game is the first thing in a long time that’s made Researchers have long known that many aspects of Pokémon GO—exercise, social interaction, spending time outside, and even the act of gaming—can help facilitate better mental health.them enjoy spending time out of the house. A Stanford-led study published in the journal Proceedings of the National Academy of Science found people who spent about an hour and a half in nature showed less depression-associated activity in the brain. In another Stanford-led study, researchers concluded time spent in nature has a positive effect on mood, cognitive functioning, memory, and that time in nature also reduces symptoms of anxiety.

Pokémon hunters are searching for creatures in both natural and urban areas, and the time they spend outside may indicate why so many players are self-reporting the game helps with their anxiety, depression, and other mental health concerns.

Collectively, about one-seventh of the people on the planet spend an hour each day playing video games. Strong opinions exist on both sides about how helpful those games can be for a person’s mental health, but some research indicates playing games may counteract much of the negative brain activity associated with depression.

According to Jane McGonigal, a renowned game designer, author, TEDx speaker, and advocate for the positive effects of video games, brain scans on people playing video games show the most active parts while playing are those associated with reward, motivation, goal orientation, learning, and memory. High activity in these parts of the brain is almost the neurological opposite of what happens in the brain when someone experiences depression. Pokémon hunters who feel less depressed or less anxious after playing may be reaping some of the benefits pointed out by McGonigal.

Is ‘Pokémon GO’ Better Than Therapy?

Although the game has reportedly helped relieve the severity of anxiety, depression, and symptoms of other mental health conditions for many players, it shouldn’t be considered a substitute for real-world psychotherapy.

“Indeed, there may be some physical and mental health benefits to playing Pokémon GO, but at the risk of sounding like the proverbial old man complaining about the kids these days, I think there are some serious mental health implications for our culture at large that won’t be addressed by simply playing a game,” said Noah Rubinstein, LMFT, LMHC, the founder and CEO of GoodTherapy.org. “One of the most important outcomes of therapy is learning to feel good, regardless of conditions.”

Pokémon GO, however, can be a fun and effective self-care activity that offers a wide range of mental health benefits: those resulting from exercise, meeting new people or interacting with friends who play, spending time outside, and activating the parts of the brain essential to healthy cognitive functioning.