Why Did We Let S&P Scare Us? 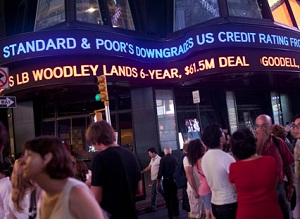 Some may be done with the S&P downgrade of the United States’ credit rating.

Why did we let the downgrade of our country’s credit rating by S&P scare us so much? So much that our market dropped over 500 points the next day? And a couple days later? And a couple days after that? Why did we pay attention to this rating agency? Couldn’t we see they have no credibility?

Three strikes, S&P, and you’re out!

Even the head of S&P, Deven Sharma, has stepped down as a result of too many strikes.

With three very obvious strikes, and likely many that aren’t so obvious, why would we be okay with their staying in the game for strike 4… and beyond? Why would we give the power to affect our investments, markets, country, lives, responses… to a group of people who’ve made repeated mistakes that caused such harm to our citizens, our country, and even our world already? Why would we allow such misuse, if not abuse, of power to continue?

This is a huge, crucial question for us, especially now. For us as individuals, as a nation… and as a world.

The question again: Why would we be okay with allowing a person or group to have a destructive impact on us? Especially when they’ve done the same thing a number of times before that we know about? And who knows how many times that we don’t know about?

Put another way: Why would we allow a person or a group to abuse their power with us? To abuse us? This is a question explored regularly with many people who come to work with me. It’s also a question we need to ask ourselves not only in our individual lives, but also in our communal lives – in our families, communities, houses of worship, schools, in our states, countries, and world. Our lives and our sanity may depend on our asking and answering this question.

Let’s begin to answer this question…

We could follow a round-about path, or we could go straight to the core. In this time when our deeply exploring and finding the truth about power is so crucial… are you open to going straight to the core with me? Our relationship with power – its misuse and abuse and its magnificent use for true good – begins at conception and forms itself unconsciously within us from that moment through our childhoods… and into our adult lives.

Let’s take two imaginary people, a man and a woman, Janet and Nathan, and ask questions that could apply to both of them. How were they conceived? Consciously or unconsciously? In real love? In the mask of love? With clear intention or ulterior motive? In a situation where one person took advantage of the other? In a cycle of abuse – did the act of conception come during the abuse phase of the cycle or the remorse phase of the cycle?

However they were conceived, that was Janet’s and Nathan’s first experience of power. And that will drive them, perhaps haunt them, likely without their even being aware of it.

Lots of very important questions! We cannot become aware of our relationship with power without these questions. Today, let’s ponder and feel into these questions as a step in exploring this crucial theme. A theme that addresses how we deal with power as individuals and as groups – from our own family to our global community. Exploring this theme not only helps individuals heal by looking in the mirror of the larger more public events and world, but also helps our world heal by encouraging each citizen to explore and heal, one individual at a time. The cumulative effect is more powerful than you can imagine!