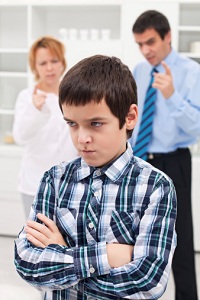 It’s not uncommon for a parent to bring their child to therapy and say, “Fix ’em!” When I hear this, I imagine my own mother taking me to a therapist as a teen because I needed “fixin’,” as we say down South. At these moments I intentionally look at the adolescent or child to see their reaction. Sadly, most of them display no reactions at all—they hear statements like this on a regular basis.

Sure, I could work on “fixing” the child, but then they’re going to return home to the same family system. I could meet with the parents and try to convince them that the real problem resides within the rest of the family system, most likely the parental subsystem, but that would go over like a box of rocks—and neither the parents nor the child will come back.

So what’s a therapist to do? In a perfect world, something called family therapy.  In family therapy we seek to understand the context that produces the child’s problematic behaviors. Why does the child misbehave? Is it simply because they are naughty or a lost cause? Or might there be larger issues that trigger the child’s behaviors? Family therapy attempts to understand the context of the behaviors in order to figure out how to change the whole system—and therein lies the catch.

If parents bring their children to therapy in order to be “fixed”, it might seem inconceivable to them that their child’s misbehavior is directly related to things like parents arguing, a change in the family’s economic or living situation, the loss of a parent’s job, death of a loved one, or the child’s feelings of disconnect from their parents.

Understanding the Context of the Family System
In the 1940s, experts first began to understand that working with entire families helped with understanding and working with various challenges. The earliest work with families centered around trying to better understand schizophrenia. What experts learned was that many children’s behaviors made sense within the context of their family.

Some parents might say, “My child isn’t schizophrenic, just a ‘pain’ who needs to be fixed!” A child raised in an environment like that will probably face serious issues with self-esteem. Imagine what it would be like to be considered the identified patient, the identified problem, the part that needs to be fixed. Life for a child in that situation can be filled with anger, resentment, depression, isolation, loss of friends, lower grades, behavior problems at school, and experimentation with drugs or alcohol. “This kid is out of control,” parents might say.

The family therapy approach conceptualizes a child within the entire family system by gathering a complete family history. Through this lens, we attempt to understand how the child’s behaviors might make sense to the child in the context of their family system. What’s going on in the rest of the family that could be participating in the child’s behavior? This isn’t an attempt to blame the parents or to alleviate responsibility for the child’s actions. Instead, it is an attempt to see the bigger picture in order to find a more stable and longer-lasting resolution to the presenting problem.

Learning From the Blue Family
The Blue family (not their real name) came to therapy because their 10-year-old son was acting out. The parents said that this was a new situation with little Johnny and they were confused. The parents said Johnny was throwing things, hitting, and having more difficulties at school. The initial family interview revealed that Mr. Blue was laid off almost a year ago and had been unable to find another job. Consequently, Mrs. Blue had obtained a job at a local grocery store in order to help out with some of their bills. They were three months behind with their mortgage payments and one car had already been repossessed. Johnny was no longer able to play on his soccer team due to financial constraints. The parents were considering divorce, but thought they had maintained it a secret from Johnny. The reality was that Johnny was well aware of the entire situation and was afraid, confused, and unable to express himself or his needs and wants.

Working with this family required attention to various levels of needs. Johnny began individual counseling to help him process his underlying emotions and Johnny’s parents began couples counseling to help manage some of their conflict and concerns. The family also began counseling together to help restore trust and alter their patterns of communication. Through this process, the family was able to see that there really was no specific “patient” and no single person responsible for the entire situation. Instead, the family was able to understand the multiple factors impacting their family functioning and began to work as a team to overcome the challenges.

Family therapy works because it helps families recognize that the “enemy” is not other family members. What needs to be changed is the broken patterns of communication and the sense of isolation, fear, abandonment, and any number of other challenges that families face. Family therapy is not always fun and exciting, but the research indicates that family therapy produces lasting improvements for families who come in.