Why Do Abuse Victims Stay with Their Abusers? 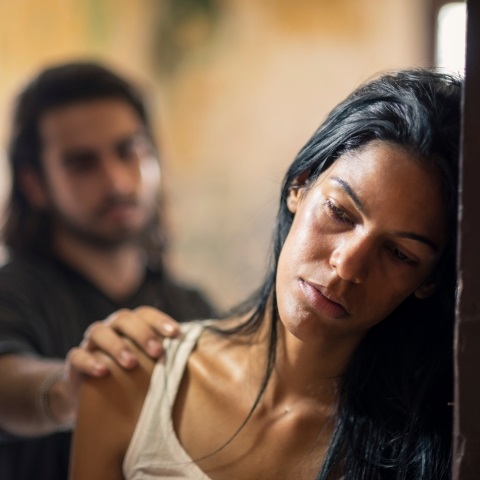 When video surfaced of Baltimore Ravens running back Ray Rice dragging his unconscious fiancée, Janay Palmer, from an elevator, football fans and victims advocates were outraged that the NFL only suspended him for two games. Earlier this week, TMZ released new video footage showing Rice beating Palmer in the head, causing the NFL to indefinitely suspend the player. Many observers were shocked to learn that Palmer married the man who allegedly beat her unconscious, just a day after he was indicted.

Palmer’s reasons for staying with Rice are her own, and she’s under no obligation to explain her decision to anyone else. Her behavior—which has included, at one point, seeming to accept blame for the abuse—has left many people confused about why Palmer stayed. It’s common for victims of abuse to stay with their abusers, though, and Palmer’s story is just one very public example of a story that plays out in the lives of thousands of people every day.

The Role of Fear

Domestic violence is a serious, life-threatening problem. The horrifying video of Rice dragging Palmer out of the elevator shows a woman knocked completely unconscious for several minutes, suggesting a concussion or other serious brain injury. Many people stay with their abusers because they’re afraid to leave. Every day, three women die because of domestic violence, and the most dangerous period occurs immediately after leaving the abuser. Women are more likely to be killed when they leave their abusers or report the abuse. Victims of abuse may make a rational calculation and decide that being hit is better than being killed.

Victim-Blaming and an Unsupportive Culture

Despite years of work by victim’s advocates, our culture still has a long way to go. The NFL’s initial decision to keep Rice was widely criticized as a sign that the organization does not take domestic violence seriously, but this problem extends far beyond the NFL. A quick perusal of social media yields dozens of comments blaming Palmer for her abuse. Even Palmer herself seemed to accept blame in her public statement about the incident. One study found that 1 in 10 men believe it’s ok to hit a woman if she does something wrong, creating a culture in which hitting women is normalized and—at least to some people—justifiable. Women who leave abusive partners need immense support to remain safe and to stay strong enough to stay gone. In a culture that frequently blames the victim, this support may not be available, causing abuse victims to stick around.

Love for the Abuser

People form strong attachments in their romantic relationships, as anyone who’s ever gone through a painful breakup can attest. Abusive relationships are no different, and people abused by their partners may genuinely love those partners. Deb Hirschorn, PhD, a GoodTherapy.org relationship Topic Expert, explains, “Janay Palmer may be staying with him because she believes he has a good heart. Victims of domestic abuse are not deluded into seeing what is not there. What they are is far more tolerant than they should be. They are generally kind-hearted people who truly see the good in others. They therefore want to overlook the bad. Unfortunately, focusing so much on the good puts them at risk for physical and emotional hurt.”

Abuse isn’t an accident. It’s something abusers deliberately inflict on their victims to steadily erode their sense of self-worth and gain more control. Joshua Nash, LPC-S, a GoodTherapy.org anger Topic Expert, says, “In an abusive relationship, the person receiving the constant anger from the abuser internalizes that anger as proof of their wrong-doing. All of their energy is spent attempting to appease the abuser, believing that they are in fact to blame for the abuser’s anger. The abuser of course reinforces this belief by saying just that. Consciously or not, the abused person strives to ‘be better,’ never quite defining what that means. Their chronic sense of shame and low self-worth perpetuates this dynamic.”

Many abusers work steadily and deliberately to foster dependence in their victims. When the choice is between homelessness or poverty and staying with an abuser, many people choose to remain with the abuser, particularly if they have children or want to pursue higher education. Even when abuse victims work to save money to leave, abusers may take their money or undermine their attempts at independence.

As media outlets try to understand Palmer’s decision to stay with Rice, it’s easy to lose sight of the real question, which is why and how Rice learned that it’s acceptable to attack a partner. The reasons for staying in an abusive relationship are complicated and unique to each individual. To read the stories of some people who were abused by their partners, check out the Twitter hash tag #whyIstayed.

If you or someone you know may be experiencing domestic violence, help is available. Always call 911 in an emergency.

If you’d like to make a donation in support of the National Coalition Against Domestic Violence (NCADV) through GoodTherapy.org’s GoodCause, click here.