When Your Partner Won’t Come to Couples Therapy 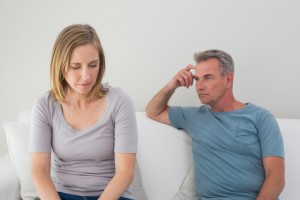 Perhaps you and your partner have been fighting for years, going round and round about the same issues. Or possibly you have retreated into icy silence, not even bothering to fight anymore. Or maybe you just feel like you’ve lost the sense of connection with your partner: these days you only talk about who is driving to soccer games or picking up groceries.

Whatever the scenario, you have reached the point where it feels like your relationship is on life support and you don’t know how to fix it, so you suggest the two of you go to therapy. And your partner says no.

Such a refusal can feel like a punch in the gut, maybe even the final blow to your relationship. You may feel angry, hurt, and rejected. After years of unhappiness, you reached out to your partner with the only solution you think might help, and he or she refused it. It may feel like your partner has confirmed your worst fear—that he or she doesn’t care about you or the relationship.

As angry and hurt as you feel, try not to give up just yet. You probably think you understand the meaning of your partner’s refusal, but you might be wrong. When couples have experienced years of conflict or disconnection, they often misperceive each other’s thoughts and feelings.

By trying to understand and respond to your partner’s concerns about therapy, you may be able to turn things around. This approach can feel very risky, like a knight going into battle without a suit of armor. But it’s only by taking off your armor that you can begin to have a meaningful discussion instead of a battle.

Here are some suggestions that can increase your odds of success.

1. Choose a time to talk when you are both feeling calm and there are no distractions.

2. Reassure your partner that the purpose of this talk is not to criticize or assign blame, but to try to understand his or her perspective. For example, you could tell your partner: “I know we don’t have a good track record of talking things out, but I really want to understand how you feel about this.”

3. Ask your partner to explain his or her concerns about going to therapy. Make sure your tone is open, curious, and nonjudgmental. We all respond more strongly to nonverbal cues such as facial expression and tone of voice than to the actual words spoken. When there is a history of conflict, people become even more sensitive to nonverbal cues.

4. Once your partner expresses his or her concern, avoid the temptation to contradict, defend, minimize, or criticize. Instead, begin by trying to put yourself in your partner’s shoes and understand where he or she is coming from. Then let your partner know you understand, even if you disagree. Some examples:

5. Offer your partner a perspective that addresses his or her concerns without contradicting, defending, minimizing, or criticizing. Some examples:

Will this be an easy conversation to have? Of course not! If you could have this conversation easily, you might not be considering couples therapy. So prepare by practicing and anticipating what might throw you off. And have a fallback plan. If you find yourself getting too angry or defensive to have the conversation the way you want to, you can always tell your partner, “Let me think about what you’ve said and get back to you.”