When Worry Won’t Quit: How to Stop Worrying and Start Living 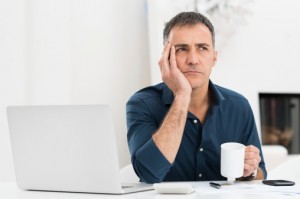 Stop worrying! I know, easier said than done. It’s also pretty annoying to hear, especially when you feel like you can’t stop. However, not only is it possible to stop worrying, your life will be better if you do stop.

Everyone who has ever worried—and that’s everyone—knows worrying feels terrible. But you may not know it’s also bad for your health. It saps your energy. It disrupts your sleep. It distracts you from your work. It stops you from enjoying your life.

While some worrying is inevitable, it’s important to have some skills to combat your worries so they don’t overwhelm your life.

Worries are thoughts. Lousy, repetitive, anxiety-inducing thoughts, but just thoughts. You need other, helpful thoughts to challenge those negative thoughts and, ultimately, replace them.

Worried thinking: I have to worry. If I don’t worry, something bad will happen. But something bad is already happening: you’re worrying.

The pain of worrying is often worse than the outcome of the situation you’re worrying about. There’s a wonderful quote by Will Rogers that expresses this irony: “Worry is like paying on a debt that may never come due.”

Some people think worrying will protect them from something happening or keep them on their toes so they can protect themselves if something does happen. They’re confusing being aware with worrying. It’s helpful to be aware of potential problems so you can prepare for them. But you can do that without worrying.

It’s the difference between being aware that someday you may experience the pain of grief and loss and spending your life worrying about your loved ones dying.

Some people think worrying will protect them from something happening or keep them on their toes so they can protect themselves if something does happen. They’re confusing being aware and worrying.

Another example is the difference between being aware that there are people who could make fun of you if you say something stupid and being so worried about the possibility of someone making fun of you that you never say anything.

At first, worrying and being aware may feel the same. A warning signal goes off in your brain: Oh, shoot, I have to talk to my boss about my vacation before it’s too late, or, I need to deal with my taxes. Your worry alerts you there could be a potential problem.

But ongoing worry is like a warning bell that never gets turned off. You got the message. You can turn off the alarm and deal with what you need to deal with.

Some people keep the warning bell on because they’re afraid that without that alarm shrieking in their ear they’re going to forget to deal with what they have to deal with. But it doesn’t seem to work that way. Instead, people are so rattled by that constant alarm and in such a state of fear that they become incapable of dealing with the problem.

The most effective way to deal with worry is to deal directly with the cause of it.

I can’t tell you how many times I’ve worried about making an uncomfortable phone call—the warning bell telling me it might be unpleasant, then the incredible relief of actually dealing with it and getting it over with. Even if it was unpleasant, it’s better than the worry.

The longer you postpone the actions that you need to take, the longer you have to suffer with that alarm bell going off in your head.

It reminds me of the difficulty of getting children to do their homework. As a parent, you can sit back and see the situation clearly. If the child does their homework right after school, without argument, it gets completed quickly and the child has the rest of the evening to relax. On the other hand, if the child perpetually struggles to get out of doing their homework, if they beg and plead and procrastinate, then both the child and their parents spend the entire evening suffering and fighting. The resistance to doing what needs to be done not only ruins the evening but can, over time, damage the parent-child relationship and the child’s self-esteem.

So, thank your worry for the warning, but then turn it off and get to work.

National Institute of Mental Health. (n.d.). Generalized Anxiety Disorder (GAD): When Worry Gets Out of Control. Retrieved from http://www.nimh.nih.gov/health/publications/generalized-anxiety-disorder-gad/index.shtml