When It’s More Than Just a Diet: An Introduction to Anorexia Nervosa 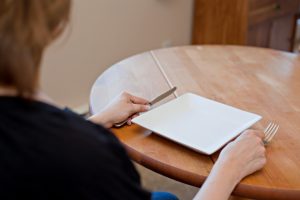 “Can’t you just make them eat?”

This is a common question friends and family members may have when a loved one has been diagnosed with an eating disorder. There are several types of eating disorders, but here we will be focusing on anorexia nervosa. Although there have been some high-profile cases of anorexia nervosa in the media, with celebrities like Karen Carpenter and Portia de Rossi bringing more attention to this mental health issue, anorexia nervosa is complex and can be challenging to understand.

It is estimated fewer than 2% of the population has anorexia, but those affected by it tend to be severely impacted. The significant medical complications that come with anorexia nervosa can be dangerous, even life-threatening. Accurate diagnosis and adequate treatment in the appropriate setting must be a priority in order to promote recovery.

Risk Factors That May Contribute to a Vulnerability to Anorexia Nervosa

The Oxford Handbook of Eating Disorders explores various risk factors for anorexia nervosa as identified by supporting research. Some potential risk factors include childhood issues around eating, including picky eating, digestive and food-related problems such as struggles around meals, high levels of exercise or dieting behaviors in adolescence, exposure to trauma or abuse, and perfectionism. Compared to the general population, people with anorexia nervosa also tend to have a higher prevalence of anxiety and obsessive compulsive traits that co-occur with their eating disorder.

According to the Diagnostic and Statistical Manual of Mental Disorders (DSM-5) used by mental health care professionals to accurately diagnose mental health issues, there are set criteria that must be met in order for someone have a mental health diagnosis. For anorexia nervosa, the criteria include the following:

There are some warning signs loved ones should be aware of if they think someone may be experiencing anorexia nervosa. These may include (but are not limited to) rapid weight loss, intolerance to cold temperatures, excessive exercise, declining to eat meals completely or having unreasonably small portions, declining to eat foods deemed “unhealthy,” and significant criticism of one’s own weight and appearance.

Every person with an eating disorder will have a unique experience and expression of their diagnosis.

A case study has been provided below as an example, but please remember that although there are some generalities among people with eating issues, every person with an eating disorder will have a unique experience and expression of their diagnosis. Also, it is important to note this case study has been created to include various aspects of real cases, symptomology according to the DSM-5, and some fabricated information. Any resemblance the case study may have to an actual person is purely coincidental.

Julia, 23, is a former gymnast and cheerleader. She has always had a small frame, but her family noticed that when she reached high school and her sports became more competitive, Julia became more concerned about and critical of her weight. Julia started withdrawing from friends and social opportunities as she began to exercise more and became more selective and rigid about what foods she would eat. Sometimes at meals, it seemed like she would just cut her food into small bites and push the food around on her plate, ultimately eating little. She was very concerned about becoming smaller and lighter, believing it would benefit her in cheerleading and gymnastics. Her coach had encouraged her to lose 5 pounds at one point but later became concerned about her weight loss as Julia’s energy level and performance were negatively impacted by her extreme weight-loss measures. Her family also noticed some changes in her mood. Namely, she exhibited increased irritability, possible signs of depression, and had difficulty concentrating and remembering things. Now, as an adult, Julia’s body appears frail and she weighs less than she did when in high school. When asked about her weight, she is either dismissive or defensive, and often this discussion becomes emotional and difficult.

Looking at the case study, you can see how symptoms escalated over time and may have been difficult to identify due to the person’s environment.

Hopefully, this article has provided a brief introduction to the symptoms and presentation of anorexia nervosa. Future articles will focus on finding help, the various levels of care in eating disorder treatment, and supporting a loved one with an eating disorder.

If you or someone you care about is experiencing eating issues, seek medical intervention or contact a licensed therapist who specializes in eating disorders.