What Same-Sex Couples Can Teach Heterosexuals about Marriage 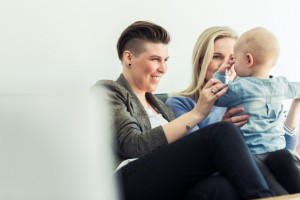 Back in the day, back when I was studying psychology in college, the research and theory was all based on men. It was assumed that men represented the species, that they were more important, even that the female psyche was less developed, more infantile than men. I actually had a famous male developmental psychologist tell me that Erik Erikson’s stages of identity development didn’t apply to women—women waited in limbo until they got married and then molded their identity to their husband’s!

But then the women’s movement hit academia and women were studied alongside men and in their own right. Lo and behold, we found many ways in which male and female psychology is the same—but some that are different. And it expanded our understanding of men, women, and the human species.

We are at the beginning of a phase in which social scientists and therapists are paying attention to same-sex couples and how they do or don’t resemble heterosexual ones. Perhaps this is fueled by the marriage-equality movement and the claims by those who oppose it that gay marriage will destroy society and that gay parents are not as good. But it’s getting more interesting, as the research goes beyond attempts to boost the credibility of lesbians and gay men as partners and parents.

In June 2013, The Atlantic published an article titled “The Gay Guide to Wedded Bliss,” a well-researched piece by Liza Mundy summarizing this work. The study of same-sex couples was actually pioneered 30 years ago by sociologist Pepper Schwartz and her colleague Philip Blumstein in a book called American Couples. Blumstein and Schwartz studied heterosexual married, cohabitating, gay male, and lesbian couples, and the findings were fascinating. Among the most important: both lesbian and gay male couples are more egalitarian in their dealings with other, division of household labor, in every way. That’s a finding repeated over and over by whoever has done the research. Mundy makes the lesson explicit: “By providing a new model of how two people can live together equitably, same-sex marriage can help haul matrimony more fully into the 21st century” (p. 58).

John Gottman, researcher, marriage counselor, and author of many self-help books, has extended this research to the important topic of how couples fight and resolve conflict. For all relationships, how differences are mediated is probably more important than what the differences are, and in Gottman’s research it predicts whether a couple will remain together or split. So it is significant that he found that gay male and lesbian couples were more upbeat, affectionate, and used more humor when fighting, and exhibited less “belligerence, domineering, and fear tactics … than straight couples.” Gottman, like other researchers before him, also found fairness and power sharing more common in gay couples. Apparently, this sense of partnership extends to the important realm of problem solving.

What exactly does “egalitarian” mean? How do you achieve “power sharing”? Well, for starters, same-sex couples do roughly the same amount of child care and household chores. And even in the 21st century, that is rare among heterosexual couples.

What exactly does “egalitarian” mean? How do you achieve “power sharing”? Well, for starters, same-sex couples do roughly the same amount of child care and household chores. And even in the 21st century, that is rare among heterosexual couples. Maybe straight women need to take a page from the lesbian playbook and simply assume they have a right to an equal division of chores and dirty diapers. Straight men rarely do a fair share of this work, even when both parents work. Second, there are no gender stereotypes to fall back on, so when household chores get divided, they are all up for grabs. The person who cooks may also take the car to the mechanic, vacuuming and toilet scrubbing is not a woman’s job (which woman?), and taking out the garbage is not a man’s job (which man?).

So far, this sounds like a straight woman’s dream. But here’s an area more problematic: when a same-sex couple decides to raise kids—no one is privileged to make the decision about whether to stay home or work. It’s an unspoken assumption on the part of many heterosexual women—in those families that can afford to live on one income—that they get to decide for themselves about the “work-life balance.” If they decide that their kids need them home full time, their choice is sacred.

Once again, since same-sex couples can’t rely on gender stereotypes, these kinds of parenting decisions are discussed and decided equally. In fact, lesbian couples tend not to “specialize” in this way—both may work, full or part time, and they both get some home time as well. And gay male couples, who often have a stay-at-home dad, fight about who gets to work, not who gets to stay home. Mommyhood in general is not privileged or reified in same-sex couples—because it is impossible to do so (although some lesbian couples may subtly privilege birth mothers). I’m not entirely sure heterosexual women, generally, are yet willing to give up the Mommy card, which involves giving up not only the right to decide about staying home but also the assumption that moms “know better” than dads when it comes to decisions about the kids.

Another area that researchers are just beginning to touch on is what same-sex couples teach us about gender differences. For example, although the jury is out on whether divorce rates are the same among gay couples and heterosexual couples, one statistic is consistent: lesbians divorce more than gay men and maybe even more than heterosexual couples. Since we also know that heterosexual women ask for divorces more often than their spouses, an intriguing question is raised about gender. Maybe women are “the problem” in marriages, divorce-wise—maybe they are too picky, too fickle, too prone to think of changing partners as the solution to their problems.

There’s another huge difference between same-sex couples and heterosexual ones that bears extensive discussion; maybe I’ll write my next blog on this. Nonmonogamy is increasingly being discussed in the heterosexual world—this month GoodTherapy.org asked its Topic Experts to comment on it. Among gay men, nonmonogamy may be the norm, and it is more common in lesbian relationships as well. We’ve just begun to scratch the surface of what gay couples can teach heterosexual ones about open relationships. Stay tuned for more.