What May Be Affecting Your Indecisiveness? 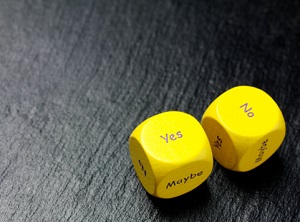 Decisiveness is freedom, or so the saying goes. But as anyone who has experienced the paralyzing brain freeze that goes along with being unable to decide between two or more options knows, indecision can feel more akin to entrapment. Why is it that some people seem to make choices in their lives seamlessly, with little-to-no excessive effort, while others struggle to find the answers to what it is they want, and still others display a startling lack of cognitive awareness in their day-to-day decisions?

New research conducted by the University of British Columbia (UBC) shows that a small section of the brain called the lateral habenula may play a critical role in decisions involving cost-benefit analysis. Examples of such decisions are buying a house or a car and choosing a career. The research suggests that without the influence of this tiny region of the brain, we would have no guiding light with which to weigh our options and make the best choice possible.

Prior to UBC’s study, published in Nature Neuroscience, the lateral habenula was believed to be related primarily to behavioral issues with depression and avoidance. Professor Stan Floresco of UBC’s Psychology and Brain Research Centre (BRC), who authored the study, said in a UBC News report that his findings suggest a “misunderstanding” among scientists of “the true functioning of this mysterious, but important, region of the brain.”

Sound familiar? Obviously, people are not rats, but the behavioral patterns witnessed do seem to mirror the human tendency to exercise caution and restraint when faced with limitations in finances and time, as well as the tendency to throw caution to the wind when financial and other resources feel limitless.

Floresco and his colleague, Colin Stopper, also observed that when they turned off the lateral habenula, the rats made their reward selections at random, no longer displaying any sense of which choice was the wiser, more practical one based on their circumstances. This suggests its importance in weighing the pros and cons of a decision.

Up until this discovery, it was widely accepted that “deep brain stimulation” of the lateral habenula alleviated the symptoms of depression in people because it somehow increased levels of happiness and contentment. However, Floresco now sees the efficacy of this treatment being directly linked to the fact that when this part of the brain is not fully engaged, people do not stress as much over the source of their unhappiness; they simply cease to care, which may appear to put them in a more peaceful, positive state. After all, overanalyzing a situation can make any experience more stressful than it needs to be.

More research is needed to fully comprehend the brain functions involved in making decisions, but what is known is that the ability to calmly and coherently assess all sides of a situation and to make beneficial, well-informed choices is essential to a person’s well-being. It follows that, as Floresco noted in his research, the greater our understanding of these mental processes, the better able the medical community will be to help those with mental health issues who may be experiencing impaired decision-making abilities.