What Lies Beneath: The Hidden Stories Behind Your Actions 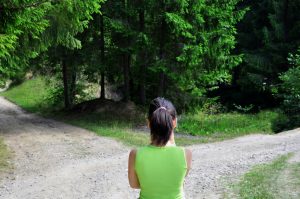 In my work as a therapist, I have learned that every action taken by a person matters. It speaks to who the person desires to be and what they want for their life. Entering therapy sessions with this knowledge has prevented me from missing important aspects of the stories I hear. People are constantly making choices, taking steps toward something, and rewriting their stories. It is typical for people to be unaware of these processes. When we engage in these mindless forms of living, we are prone to neglect our true selves—our intentions, values, hopes, dreams, principles, and commitments.

When people notice actions they (or others) do not like or reject, they may avoid even reflecting on them because of the uncomfortable emotional or cognitive experiences that might come with them. However, even in actions we would prefer not to engage in, we can find valuable information about ourselves and what we stand for. I encourage people to question their actions and choices, especially when these do not fit their preferred narratives. I encourage people to uncover their deeper intentions and then to question those intentions, and continue this process until they notice true movement in their journey. And I help people accomplish this movement by asking specific questions regarding what hides beneath their actions.

I will use a fictitious person in therapy, Mark, throughout this article to illustrate this process.

Let’s say Mark is battling an addiction to alcohol. He tells me he went to the bar last weekend, despite knowing this may trigger a relapse. Mark shares he did, in fact, relapse. Many therapists would quickly ask for details about the relapse or discuss coping skills. Some of the information that emerges from such probing might be valuable; however, this line of questioning emphasizes the relapse and might unintentionally reinforce shame, which can often strengthen cravings or urges and potentially lead to further relapses.

I would leave the relapse for future discussions. Problems tend to resurface on their own in therapeutic conversations, so I don’t have to worry about this angle right away. Instead, I might inquire about details surrounding the decision to go to the bar and the steps that led to going to the bar. This might sound a bit unorthodox to some therapists, but this approach has proven productive for me.

Why Intentions and Values Matter

One of the most important goals of my initial inquiry is to identify the intention driving a particular action or decision. Intentions can hold valuable information about the person’s resources and what is truly important to them in life. Mark decided to go to the bar knowing this could lead to relapse. I might simply ask, “Mark, what was your intention behind your decision to go to the bar that night?” This question would automatically influence him to reject focusing narrowly on the problem (in this case, relapse) while also taking his attention away from possible self-criticism and/or shame. This type of questioning can also create an entry point for an alternative story, one that is more complete than the story of “addiction.”

Mark might tell me he decided to go to the bar because he thought he could resist the urge to drink. This would give us a chance to talk about what informed Mark to trust his ability to resist the problem. Mark may tell me his intention was to see a friend he has not seen in a long time. This conversation would inevitably lead us to explore what is so important to Mark that he was willing to put himself in such a challenging situation.

There must be something, or things, Mark truly values, so much so he was willing to risk his sobriety. Mark’s values guide his actions, even though he may lack awareness of this. Inquiring about his values and how they relate to his actions can facilitate movement toward the preferred, away from problems, and increase his sense of agency. In this case, Mark might value connection or friendship.

The Role of Hopes and Dreams

Actions and decisions also speak to a person’s hopes and dreams for their own experience or preferred story. When a person is able to identify the intentions and values that support their actions, they can acquire a clearer sense of the direction in life they would like to take, as well as the efforts they have made to get there.

The result of making commitments that are supported by intentions, values, hopes/dreams, and principles would be preferred actions.

Hope might be seen as a force that guides every step a person has taken. After learning about Mark’s intentions and values associated with his decision to go to the bar, I might want to ask something like, “What were you hoping would happen as a result of you going to the bar to meet your friend?” One potential development that could come from this question might be, “I was hoping to reconnect with my friend.” Mark might benefit from continuing to question why reconnecting is important. If done well, Mark may reach a conclusion about what he hopes for in life; some examples may include strong connections, being present for others, or feeling supported by others. Uncovering hopes is a process that takes dedication and honesty with oneself.

How Principles Factor In

People typically benefit from having a strong understanding of their beliefs and convictions. Although some truths can be influenced by social and cultural discourses, they can influence a person’s belief systems, forming a platform for their actions. “Shoulds” and “shouldn’ts” can have a very negative connotation in the world of psychotherapy, and while this is understandable, eliciting a person’s account of their belief systems (even if influenced by culture or social messages) can be a great source of information that might lead to self-awareness.

For instance, I am often curious about what a person in therapy believes the world “should” be like and how this would contribute to their and others’ life journeys. Mark may learn he believes “everyone should feel supported by someone in their lives, regardless of their choices or how they identify.” He might be able to reconnect with his personal agency, as well as the principles of justice and fairness. If these principles are Mark’s foundation for his beliefs, it would make sense that going to the bar to meet his friend might supersede his sobriety. Mark might be willing to risk sobriety because he truly and naturally believes he should have strong supportive relationships in his life despite his history of substance abuse or the label of “addiction.”

Principles might also help a person increase awareness about how to create balance between their actions and their needs. In our example, Mark may come to understand that sacrificing his sobriety could lead to fights, lack of trust, or disconnection from others. This can greatly harm his ability to form a supportive network of people—and eventually cause him to feel unsupported by people in his life.

Once people understand the true meanings behind some of their actions and decisions, they can typically see the connections between previous discoveries and their preferred stories for the future. Therefore, I ask questions that can bring together all previous discoveries to help people identify their ideas about what commitments they want to make in their lives. I might say, “Mark, you’ve told me that your intention for going to the bar that night was to reconnect with your friend, as it is important to you to feel supported by people in your life, and to be there for others despite the problem of alcoholism you have been struggling with. What do you think having this knowledge about your intentions, what you value, and what you hope for in life can help you do as you continue working on rebuilding your relationships and maintaining your sobriety?” This question is important because it presents the platform a person might need to more easily commit to a life representative of their preferred story.

The result of making commitments that are supported by intentions, values, hopes/dreams, and principles would be preferred actions. Actions that are consistent with a person’s preferred story can create barriers to problems when they try to re-enter a person’s life and cause more disruption. The goal of having these sorts of conversations is to invite new possibilities, to be more compassionate and kind to ourselves, and to increase our awareness about why we do what we do. This can be scary territory, but it is important to remember fear is one of the biggest blocks standing between us and our preferred stories.