‘What Have I Done?’ An Introduction to Trichotillomania 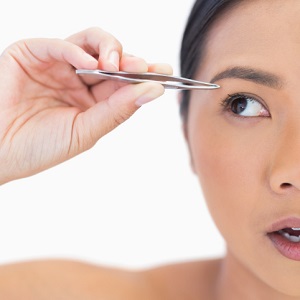 Imagine having long, beautiful lush lashes, and then in an instant, realizing you have mindlessly yanked them out for no apparent reason. Worse yet, you have pulled the majority out, so chunks of lashes are now missing from your eyelid. You are ashamed to go out in public looking that way, and now are desperately trying to hide the damage. Silently destructive, trichotillomania is a strange-sounding word for a damaging obsessive hair-pulling issue.

Trichotillomania, trich for short, causes those afflicted to pull hair from their scalp, eyelashes, eyebrows or other areas of the body. You know you have it when you feel compelled to pull and distressed once you’ve done it. Trich is known as a body-focused repetitive behavior (BFRB), along with skin picking and nail biting, and is categorized in the Diagnostic and Statistical Manual (DSM-5) under obsessive-compulsive and related disorders. Although it would seem that this categorization is correct since it does have an obsessional component to it, an argument can be made that it should be treated differently than other obsessive-compulsive behaviors.

Why on earth would anyone want to pull their hair out? This question ruminates in the minds of those who have never experienced the urge to pull and stirs the shame felt by those who experience this issue. After all, society deems long eyelashes, lustrous hair, and perfect skin beautiful. Therefore, removing the beauty becomes taboo and shame inducing.

The reason hair is pulled is not clear, but what experts have learned is that it feels necessary to remove undesirable hair (the compulsion), and not to pull would create tension and anxiety. Often this behavior is felt when idle, such as driving a car, talking on the phone, reading a book, or other sedentary activities. Triggers can be identified for some people; others have no known trigger, thus making it harder to treat.

From my personal experience, I feel a sense of tingling and itching in my eyelashes. This sensation does not go away until an errant eyelash (or twenty) have been removed. Once the seemingly offensive lashes are out, a wash of remorse and regret immediately takes hold. I often buckle under the shame, and set about a course of action never to have it happen again.

I am not alone. One out of every 50 adults will experience trichotillomania, according to the Trichotillomania Learning Center. Body-focused repetitive behaviors typically appear in late childhood and early puberty. Although it occurs equally in both boys and girls initially, it becomes predominately a female issue in adulthood.

What the research literature does not address is the underlying obsession and unforgiving quest for perfection. If an eyelash is wayward, it must come out so as not to have an imperfect lash line. If a scab is forming, removal is necessary to achieve smooth skin. This compulsion to achieve perfection in life zeroes in on those afflicted with trich, and escalates the issue.

Did trichotillomania come first; or did the perfectionistic tendencies bring it out? We will never know. However, it can be argued that lurking beneath the surface of someone with trich is a perfection-obsessed ripple waiting to lap up the opportunity to pick and pull.

Although no one treatment approach is best, body-focused repetitive behaviors like trichotillomania are showing responsiveness to cognitive behavioral therapy and companion therapy such as dialectical behavior therapy, habit reversal therapy, and acceptance and commitment therapy. By learning to understand and change the thoughts, feelings, and behaviors associated with trichotillomania, people are gaining ground in conquering it.