Weathering Fear and Anxiety in the Aftermath of Hurricane Sandy 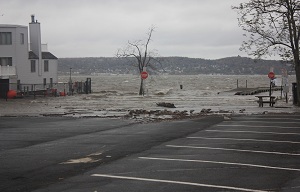 Much of the East Coast just lived through Hurricane Sandy and then a no-name Nor’easter—Nor’easters are anonymous, even though their destruction is real. The high winds, storm surges, and tides left hundreds of thousands of people without electricity, which means no heat, food, or hot water, and thousands are homeless and traumatized. It’s cold and getting colder. More than a hundred people died in these storms.

I was worried while I waited the Sunday before Sandy’s arrival. I wasn’t home; I was in New Jersey spending time with family, having wonderful fun but eager to get back to my apartment in Manhattan. What if the predictions were true? What if the bridges and tunnels were closed and I couldn’t get back home? Who would take care of my cat, Fifi? I knew my apartment was on high ground, and my family in New Jersey was safe in their home, too, but I felt anxious, so I left earlier than I might have.

Before the storm hit, people who lived near rivers, inlets, or the ocean were told to seek higher ground; most complied, but some refused to leave their homes. They wanted to protect their possessions—their “castles,” as a few put it. Although people feel safer and more comfortable surrounded by their own things, as I did, some who lived in high-risk areas jeopardized or even lost their lives because they refused to relocate. Weather predictions don’t always turn out to be true, but there’s an old saying: Better safe than sorry.

By the day the storm arrived, tunnels, bridges, subways, and highways were closed. There was no way to get around. My “what-ifs,” the worries I had while visiting in New Jersey, all turned out to be warranted, even though they were more about my anxiety than about real fear. I was in a safe place; my life was not in danger.

The first few days after the storm, many people walked from their homes in Queens or Brooklyn to Manhattan so they could go to work, but most stayed home, which was costly but wise. As I write this, New York is not yet itself. My supermarket’s shelves are a little bare, and there are gasoline shortages (75% of New York’s gas stations are without fuel) so I am leaving my car parked in its garage, which, luckily, did not flood. Mass transportation is almost back to normal, and I can basically walk everywhere I need to go anyway—my office, stores, the yoga studio. No member of my family was injured, although some were without electricity and forced to seek temporary housing. A few relatives cannot yet move back into their homes, but nevertheless we are the lucky ones.

The survivors whose homes were destroyed, or who are without electricity and running water, are living a nightmare. Those who lost family members are even more bereft. I cannot imagine how I would feel, how I would endure.

Hurricanes should be feared, but sometimes people downplay real danger as a form of self-protection—a very bad and illusory kind of self-protection which works backward and actually puts you at risk. It’s a psychological defense mechanism called denial: You shut off your feelings and fool yourself into not feeling your fear. Refusing to evacuate makes some people feel big and strong; leaving makes those people feel little and weak. Some people are afraid that if they leave, their homes will be looted. This is a real concern, as empty houses are sometimes burglarized. We wish to protect what belongs to us, but life is more precious than property.

People who habitually discount real fear are referred to as counterphobic. It means doing the opposite of what you’re scared to do, a condition that calls for treatment just as urgently as anxiety or posttraumatic stress; it involves ignoring something dangerous, which can lead you into real, life-threatening danger.

There’s a clothing brand whose slogan is “No fear!” The slogan more or less calls for people to fight their fears and move forward with their lives. This is a good thing—for instance, if you’re afraid of public speaking and you make yourself learn to speak up, or if you’re scared to drive and you take lessons and become a good driver—but it does not refer to really dangerous situations. It refers to anxiety, something that can be addressed and conquered, or at least made to abate. Fear refers to things that are real: There’s a hurricane coming! The water is rising and I might drown!

Some people are frightened all the time, but their fears are not real; they suffer from a condition called anxiety neurosis or PTSD. This kind of fear needs professional treatment, talk therapy, or perhaps even medication, just as counterphobia does.

How can you learn to tell the difference between fear and anxiety? Some thoughts and advice: