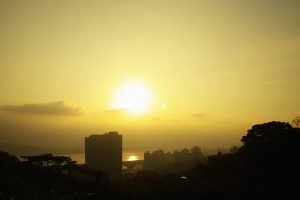 Hot climates may produce more aggressive behavior, according to a paper published in the journal Behavioral and Brain Sciences. Drawing upon several previous studies, the study’s authors—led by Paul A. M. Van Lange of Vrije Universiteit in Amsterdam—say climate can change culture, which may alter aggression levels.

According to the Federal Bureau of Investigation (FBI), the American South is more violent than other regions of the United States. In 2012, 40.9% of all violent crime occurred in the South, even though only a quarter of the U.S. population resides there.

The study notes that, with some exceptions, violence tends to increase with proximity to the equator. Previous researchers have posited several theories. For example, the Routine Activity Theory suggests people spend more time socializing in warm climates, allowing more opportunities for aggression to occur.

The new study suggests an alternative model, called Climate, Aggression, and Self-control in Humans (CLASH). This model suggests lower temperatures and wider variation in seasons force people to focus more on the future, cultivating self-control so they can save resources for times of inclement weather and deprivation.

People who live in warmer climates, by contrast, may be more focused on the present. The researchers say this so-called “fast life” strategy can lead to aggression due to a decrease in self-control and increase in impulsive behavior. Other factors, such as the unpredictability of venomous animals and the infectious diseases that tend to proliferate in warm climates, can intensify this tendency toward aggression.

A 2013 meta-analysis of aggression and geography looked at 60 studies on the correlation. The researchers found a clear association between warmer climates and more aggression with a 14% increase in conflict for each standard deviation in climate.