Can Vitamin E Protect You from Dementia and Alzheimer’s? 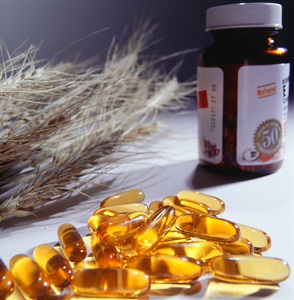 It has been estimated that roughly 5 million people in the United States have some form of dementia. Recent research suggests that vitamin E, a potent antioxidant, may help stave off or slow its progression.

Vitamin E is a fat-soluble micronutrient and is found in nuts and seeds, eggs, green leafy vegetables, wheat germ, and vegetable oils. Vitamin E protects cell membranes from damage by free radicals. One theory posits that age-related changes to the brain result from oxidative damage to cells. It has been suggested that vitamin E could minimize the oxidative stress that leads to age-related brain damage and thus prevent or delay the progression of issues such as Alzheimer’s, dementia, and other changes in cognition. Vitamin E deficiencies have been found in people with Alzheimer’s as well as in those with mild cognitive decline.

The Brain and Vitamin E
Risk factors for dementia include both those that are changeable and those that are not. Ones we cannot change include our age, gender, and genetic influence. Potentially changeable risk factors include our cardiovascular status and health behaviors. Specifically, the research to date suggests a link between having high blood pressure, high cholesterol, and increased risk of dementia. Unfortunately, drugs to treat these conditions do not appear to reduce the risk or slow the progression of dementia.

The good news is that lifestyle strategies that improve overall health can both reduce dementia risk and slow disease progression in those who already have some evidence of cognitive decline. Several studies have found that diets high in fruits and vegetables and fish, including what is commonly referred to as a Mediterranean diet, are associated with reduced risk of developing Alzheimer’s, a slower rate of cognitive decline in the elderly, and decreased mortality in those who already have Alzheimer’s. (For related posts, see my previous articles, Omega 3s for Better Mental Health and Could 10 Days on a Mediterranean Diet Improve Your Mood?)

A study published in 2009 examined the effects of taking 2,000 international units of vitamin E with or without an Alzheimer’s drug on 847 people. The researchers found that those who took vitamin E daily—with or without an anti-dementia drug—were 26% less likely to die during the study period (1990 to 2004) than those who did not. Participants who took the drug alone had no additional survival benefit. The researchers concluded that vitamin E plus a cholinesterase inhibitor may be more beneficial than taking either agent alone.

Despite this finding, other studies have shown no definitive benefit from taking vitamin E supplements. This may be due to the amount of damage that has already been done in people with Alzheimer’s or other cognitive decline, or it may be because the versions of vitamin E found in supplements tend to include only one form (alpha-tocopherol) rather than a combination of the eight related congeners, or chemical substances, that fall under the heading of vitamin E. Furthermore, malnutrition has been associated with more rapid decline in people with Alzheimer’s, and thus, supplementation alone may not counteract the effects associated with an inadequate diet.

What Are the Risks?
The authors of the aforementioned study found no increase in mortality from taking high-dose vitamin E, and instead found survival enhanced in those who took the supplement. However, others caution against the use of high doses due to possible side effects. These can include nausea, headache, bleeding, fatigue, and other symptoms. Furthermore, some meta-analyses of studies on the effects of vitamin E in people with heart disease have found an increased risk of mortality in this population. In one meta-analysis, this adverse effect was observed in those who took more than 400 IU of vitamin E daily.

Recommendations
The bottom line is that unless you have a diagnosed deficiency, a current diagnosis of dementia, or a family history, the best brain-protective strategy is probably to consume foods that are good sources of vitamin E and/or other micronutrients, fiber, and other healthy phytochemicals, and avoid diets known to increase the risk of high blood pressure and high cholesterol. Doing so will not only reduce your risk of cognitive decline, but should also improve your mood, level of energy, immune function, and help you to maintain an appropriate weight.

As always, discuss supplements with your health care provider to make sure the ones you take are the best choices and at the right dose for you.