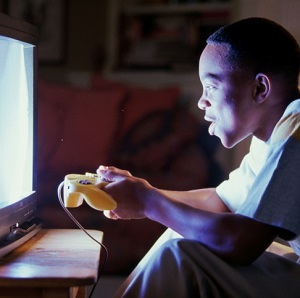 Though many tout the educational, stress-relieving, and entertainment value of video games as proof of their usefulness, others argue that the violent nature of some games leads to aggressive, immoral behavior in those who play them.

This concern is particularly heightened with regard to children and adolescents, as they are going through crucial phases of development and are especially impressionable.

Several studies have sought a deeper understanding of how video games impact social and emotional behavior. Recently, a researcher in Ontario, Canada, examined the effects of video game usage in over 100 teenagers (boys and girls) between the ages of 13 and 14 (Bajovic, 2013). Of those surveyed, 45 were identified as “violent video game players” who preferred and regularly played video games involving murder, torture, dismemberment, and the like.

Mirjana Bajovic, the author of the study, was specifically interested in the teens who spent more than three hours a day playing violent video games like Call of Duty and Grand Theft Auto. Using The Sociomoral Reflection Measure, she assessed their ability to empathize with those around them in real life.

Upon reviewing the responses, Bajovic found “a significant negative relationship” between time spent engaged in violent video games and “sociomoral maturity” (2013). Basically, the results reveal a potential delay in emotional development for these teens.

It is important to note, however, that not all adolescents who reported playing violent video games showed stunted moral and emotional awareness. No correlation was discovered between those who played nonviolent games and sociomoral development. The main factor influencing empathic behavior and tendencies appears to be the amount of time spent playing the games; not surprisingly, spending several hours glued to the screen and partaking in repetitive virtual violence was identified as the primary culprit in inhibiting sociomoral maturity (Bajovic, 2013).

In another study, a lack of self-control was observed in high school students who played one of the Grand Theft Auto games, along with an increase in cheating (in a game) and aggressive behavior (Gabbiadini, Riva, Andrighetto, Volpato, and Bushman, 2013).

Bajovic suggests that since preventing students from playing video games is most likely not an option, parents and teachers should instead encourage teens to engage in other, more positive social activities. Devoting time to cultivating compassion and tolerance at home and in school may also help to counteract the potentially negative effects of too many hours spent in violent video game territory.

Another recent study published in Psychological Science suggests that assuming the identity of either a heroic or a villainous avatar may have a significant impact on behavior in the real world. In an interesting experiment involving chocolate and chili sauce, the researchers observed the levels of sensitivity and consideration displayed by nearly 200 undergraduate students at the University of Illinois at Urbana-Champaign following a short period of time immersed in video game role-play.

“Our results indicate that just five minutes of role-play in virtual environments as either a hero or a villain can easily cause people to reward or punish anonymous strangers,” said Gunwoo Yoon, lead author of the study.

The reward, in this case, was choosing to serve chocolate sauce to a stranger rather than spicy chili sauce. The punishment, of course, was the chili sauce. Apparently, the participants were told to pour a lot or a little of one or the other in a plastic dish with the understanding that someone was going to have to come along and eat it.

The new information and conclusions we can draw are certainly food for thought.